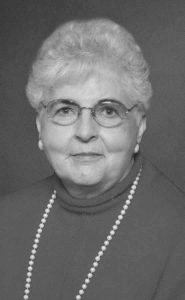 FLORENCE HESTER GOUW (FOGGIN) passed away peacefully at the St. Michael’s Health Centre, Palliative Care Unit in the early morning of Friday, January 27, 2017 at the age of 80 years.

Florence was born in Cardston on November 19, 1936 to Powell and June Foggin. Florence lived and grew up in the Del Bonita area on the family farm with her two sisters Mary and Linda. She married the love of her life, Jan Gouw in 1956. Florence and Jan had four children, and raised them initially in Milk River and then moved to Lethbridge. Florence raised her family and took care of her grandmother for many years. She was the ultimate caregiver, always giving of herself. Florence was active with Royal Purple for many years, and the United Church of Canada. She also volunteered with the Interfaith Food Bank in her later years, which she enjoyed very much.

A special thank you to Rick from Lethbridge Home Care, the doctors at Family Medical and to the palliative team, doctors and staff at St. Michael’s Health Centre who were so supportive and took such great care of Florence. We are forever grateful.