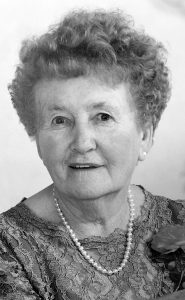 Mrs. Helen Kuniec of Lethbridge, beloved wife of the late Mr. John Kuniec, passed away at the Chinook Regional Hospital aon Monday, January 30, 2017 at the age of 99 years. She was born in Poland on August 25, 1917 where she was raised and educated. She married John Kuniec in 1939 after the war. Helen and John continued to farm in Poland until 1969 at which time they immigrated to Canada. They lived in Taber, AB and later moved to Lethbridge. Helen was employed by a factory until her retirement. Helen was a very loving wife, mother, and grandmother. She was very generous to everyone, and will be sadly missed by her family and friends. Helen is survived by her children Kathy (Mario) Siodlowski, Stan Kuniec, Irena (Jerry) Hemperek, Mike (Danuta) Kuniec, Terry (Marvin) Strachan and Bernadette Demetroff; as well as her grandchildren. Vigil Rites (prayers) will be held at 7:00pm on Friday, February 3, 2017 at MARTIN BROTHERS RIVERVIEW CHAPEL, 610 4th St. S., Lethbridge, AB. A Funeral Mass will be held at 10:00am on Saturday, February 4, 2017 at ST. BASILS ROMAN CATHOLIC CHURCH, 604 13 St. N, Lethbridge, AB with Father Lukas Drapal, celebrant.