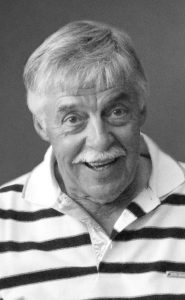 ALBERT “BERT” JAMES MCADOO passed away suddenly at the Chinook Regional Hospital on Saturday, February 4, 2017 at the age of 78 years.

He was the beloved husband of Donna (Smith) McAdoo, and loving father of daughter Colette (Gary) Wood, and son Darren McAdoo (Tracy Hatton), all of Calgary; and dearly loved by grandsons Samuel and Jackson Bagley, and granddaughters Jaide, Skylar, and Brooke McAdoo. He is also survived by three nephews, Daniel, Neil, and Alan Dowhan, along with many cousins and friends.

Albert was predeceased by his parents, along with his sister Theresa Dowhan, and brother Patrick McAdoo.

Bert was born on October 29, 1938 in Maryfield, Saskatchewan to Herbert and Mary (Moan) McAdoo and was the oldest of three children. Bert spent the majority of his childhood growing up on a farm in the Tofield, Alberta area. It was in this area he met his first spouse and mother of his children, Gladys Marie (Lauber) McAdoo, of Round Hill, Alberta. After graduation, he dabbled in a few careers until he found doing what he enjoyed in 1965, which was Seismic Oil and Gas Exploration. He spent 20 years in the Seismic industry, and this allowed him to work extensively throughout Northern and Western Canada, as well as the Southern and Western USA. It was in the Seismic business where Bert first met his future second wife, Donna Smith, of Picture Butte, Alberta.

Bert and his family moved to Calgary in the late 1960’s, but Bert never enjoyed the impersonal crowds and noise of city life. He much preferred living in small towns, where he knew everybody’s name, and could converse with everyone he encountered on the street.

In 1986, Bert moved to Picture Butte, where he immediately became a pillar of the community. Active in all community events, and always the first to lend a helping hand to those in need, Bert thrived in the small town atmosphere that he so loved. His kindness and friendly personality will be greatly missed within the community.