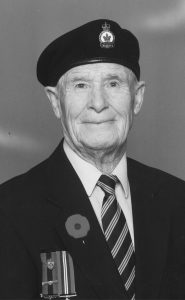 It is with heartfelt loss that we announce the passing of PETER J. SCHAMBER, of Milk River, AB, beloved husband of Helen Schamber on January 30, 2017 at the age of 100 years in the Milk River Health Centre.

Peter was born in Denzil, Saskatchewan, and moved to Primate, Saskatchewan where his parents farmed. During the dirty thirties, Peter ‘rode the rails’ across Alberta with his brother Joe, looking for work. He joined the Army during World War II serving as a mechanic and driver, bringing home many interesting stories. He then farmed in Milk River for many years. He also served as a Town Councilman in Milk River, was a member of the Knights of Columbus, and was an avid curler until his eighties. Politics was always an endearing topic to discuss. Peter brought a smile to the faces of those he touched. His family has all passed before him, except for his youngest brother Alex Schamber of Provost, AB; sisters-in-law Betty (Edward) Schamber of Kelowna, B.C. and Eleanor (Adam) Schamber of Lethbridge. Peter leaves his wife, Helen Schamber (Orosz) of 64 years; daughter Michele (Bernie) Miller, grandchildren Cody (Chayna) Miller and their children Carrera and Ciarra; sons Paul Schamber and Alvin (Sherry) Schamber, grandchildren Rory (Donedin Jackson) Schamber, Aaron Schamber, Travis (Calais Milo) Schamber and Christopher Schamber (Kamal Sekhon) as well as many nieces and nephews. Many thanks to the warm and loving care given to Peter by the staff of the Milk River Health Centre. It was sincerely appreciated.

The Funeral Mass will be celebrated at ST. PETER’S CATHOLIC CHURCH, on Saturday, February 4, 2017 at 1:00 P.M. with Father Benedicto Tugano IV, Celebrant. Interment to follow at the Milk River Cemetery.

In lieu of flowers, donations may be made to the Palliative Care Unit, Greatest Need, at the Milk River Health Centre, P.O. Box 90, Milk River, AB, T0K 1M0.