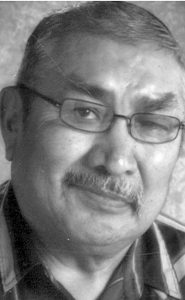 “SMITTY” LOUIS SMITH “MATOMOTAMEK KANA SOYI”, beloved husband of Betty Smith (nee English) of 51-years passed away surrounded by family and friends on January 26, 2017 at the age of 73. Louis a father, grandpa, great-grandpa, brother, uncle, brother-in-law and friend to many.

Special thank you and appreciation to the staff of Fort Macleod Dialysis & the fourth floor –Aside staff-Lethbridge Regional Hospital.

Church services to commence at 1:00 PM on Wednesday February 1, 2017 at St. Paul’s Church, Piikani Nation, Alberta. Followed by a viewing and prayers till 11:00 PM.