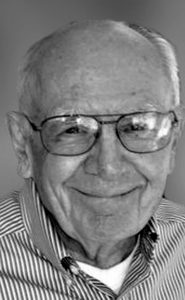 “WHEN HE SHALL DIE,

TAKE HIM AND CUT HIM OUT IN LITTLE STARS,

AND HE WILL MAKE THE FACE OF HEAVEN SO FINE

THAT ALL THE WORLD WILL BE IN LOVE WITH NIGHT

AND PAY NO WORSHIP TO THE GARISH SUN.”

Wayne passed away peacefully on January 18, 2017 at the Colonel Belcher in Calgary. Born on September 25, 1920 in Milk River, Alberta to Harry and Francis Smith, he grew up skating and swimming on the river. Wayne wanted to be in business since childhood. His first venture as a teenager was selling Liberty magazines. At the age of 18 Wayne attended Garbutt’s Business College in Calgary. After graduation he joined the army on August 30, 1939. Assigned to the Corps of Military Staff Clerks, he worked in Calgary and Ottawa until his discharge in June of 1947. A family man, Wayne married his beloved Ethel in 1946. They were happily married for 49 years. Together they opened Smith’s Grocery. Eager to embrace new challenges Wayne started at Associated Grocers. With one truck driver and an accountant Wayne developed the business into the largest wholesale grocery company in western Canada and the second largest in Canada, employing around 800 people when he retired. A longtime member of Rotary he valued people and friendships. Wayne was a man of faith and a great believer in the power of positive thinking. Often imparting words of wisdom such as “keep your eye on the doughnut and not on the hole.” He loved westerns because the good guys always won. An avid gardener, Wayne was also active in golf and swimming. We lost a true gentleman with a kind spirit whose sparkling blue eyes embraced every aspect of life. He was predeceased by his wife Ethel, grandson Justin, brother Don and stepson Nigel. He is survived by his daughter Candace, granddaughter Solveig (Giovanni), great-granddaughter Sophia, stepson Lawrence (Pat), grandchildren Debra (Art), Laura (Pete), Brent (Kelly) and Mark (Sherolee), Dean (Lena), Craig and numerous great-grandchildren, nieces and nephews. Thank you to Dr. Donovan Kreutzer and the staff of the Colonel Belcher on the Dover and Strathcona units for the compassionate care provided to Wayne. A special thank you to Dr. Lisa Morrison for her help over the years. A Commemoration Gathering will be held on Tuesday, February 7, 2017 at 2:00 p.m. at Eden Brook Funeral Home (corner of 17th Avenue and Lower Springbank Road). In lieu of flowers, a donation may be made to the charity of choice. Condolences may be forwarded to the family by visiting www.edenbrookcemetery.ca