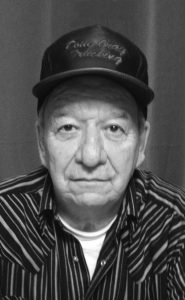 EDGAR JOSEPH ELPHEGE PRIVÉ, beloved husband of Verna Privé, of Lethbridge, passed away peacefully at the Chinook Regional Hospital, on Saturday, February 11, 2017 at the age of 76 years.

Edgar was born on January 10, 1941 in Ponteix, SK. He attended and completed all of his schooling in Ponteix. Ed left home at an early age; first to Flin Flon, MB, then to Kenora, ON, working in the forest industry. He then moved back home to Ponteix and worked various jobs. He married Verna Haakensen in 1963 and they lived in different locations prior to settling in Lethbridge. He worked at Dresser Clark for many years as an overhead crane operator and retired when the plant was closed. Dad enjoyed camping with his friends and family and watching all the grandkids at their sporting events. Most times, dad could be found at a rink or ball diamond passing the days by, even if he didn’t know any of the participants. He also enjoyed getting out the fishing rod as long as they were biting. He enjoyed doing all the barbequing at the family events, playing cards with their friends and his morning coffee at various locations. He was a season ticket holder of the Lethbridge Hurricanes and the Coaldale Copperheads and enjoyed each of the companions and great friendships he made there. His biggest joys were his family and grandkids.

A Viewing will be held at CORNERSTONE FUNERAL HOME, 2800 Mayor Magrath Drive South, Lethbridge, AB, on Wednesday, February 15, 2017 at 6:00 P.M. with a Prayer Service starting at 7:00 P.M. with Deacon Frank Peta officiating.

In lieu of flowers, donations may be made in memory of Ed to KidSport Lethbridge, 1001 – 3 Avenue South, Lethbridge, AB, T1J 0J3.