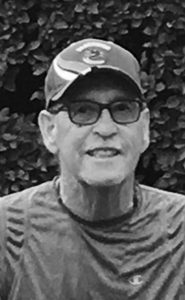 RONALD “RONNIE” CHARLES JORDAN, beloved husband of the late Marjorie Jordan, of Lethbridge, passed away at the Taber Health Centre, on Thursday, February 9th, 2017 at the age of 78 years.

Ronald was predeceased by his loving wife, Marjorie, parents Jim and Alice Jordan and brothers Ken, Vernon and Keith Jordan.

Ron was born September 13, 1938 in Vulcan, AB. He grew up on the family farm with his sister and four brothers outside of Champion. Ron married Marjorie Bride (from Vulcan, AB) on February 13, 1960 and began raising their two sons Larry and Darcy.

Ron and Al Jackson partnered up in the 60’s to open AG Foods in Vulcan where he honed his skills as the “local butcher”. Eventually Ron and Marj moved to Lethbridge where he began a lengthy career with “ALCB” and employed several of Larry and Darcy’s friends until his retirement at age 55. Ron and Marj enjoyed and created several homes together, building, renovating and eventually flipping them. Both loved gardening and the many family camping trips.

In 2001 Ron literally “HIT THE JACKPOT”, winning the 649 after much encouragement from his oldest son Larry. During his retirement years Ron supported and assisted Marj with her extensive artwork and pottery making sessions until her passing. Eventually, Ron moved in with Darcy, Leanne and their children enjoying the acreage life gardening, planting trees, renovating, the never ending gatherings, canned refreshments, a variety of home cooked meals and his favourite desserts.

Everyone loved Ronnie! He will be remembered as an exceptionally kind, loving, gentle man who possessed a great sense of humor and fun. Ron, you were the best of fathers and grandfathers and shall be dearly missed. We are so grateful for all that you did and gave to us and we are better human beings for you doing so.

Many thanks to our families and friends for your support, heartfelt words and food. We would also like to acknowledge the compassion shown to Ron from the doctors and nurses at the Taber Hospital.

In memory of Ron, donations may be made to a charity of one’s choice.