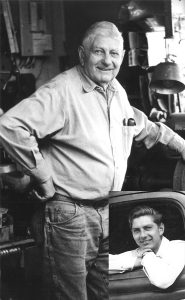 BILL VOGT, beloved husband of the late Eleanora, passed away at the Chinook Regional Hospital on Sunday, February 12, 2017 at the age of 91 years.

Bill was predeceased by his parents Peter & Pauline Vogt, his sister Tena, and brothers Hank, Peter, Alex, Andrew and Victor.

Bill Vogt was born in Rush Lake, Saskatchewan on Christmas Eve, Dec. 24, 1925. The family moved to Chin, Alberta in 1931 and to the Sunnyside area a year later. He attended grades 1-9 at the Crystal Lake School near Lethbridge, and grades 10 & 11 at Hardieville School.

After graduating, Bill worked at the Galt No. 8 Coal Mine, and briefly in construction.

Bill and Eleanora married in 1948 and moved to Picture Butte in 1951. Bill worked for a welder until he opened his own shop (Bill’s Welding) in 1955.

Over the next 62 years, Picture Butte was central to Bill’s life. He served on town council, the county school board, was President of the Fish and Game Association, President of the Piyami Archers, Treasurer of Trinity United Church, a member of the Chamber of Commerce and Elks Club, drove bus for seniors and school trips and was Fire Chief for more than 30 years.

In 1994, he was recognized as Picture Butte’s Citizen of the Year, and only weeks before his passing was honoured by the Fish and Game Association with a lifetime membership.

Bill, who was often seen patrolling town in his Black Widow, enjoyed fishing, camping, and painting and loved to share those passions with his grandchildren.

He was a regular on coffee row, where he closely followed community activities and enjoyed the stories and fellowship of his close friends.

We will “bush for coffee!!”

One Condolence for “VOGT, Bill”