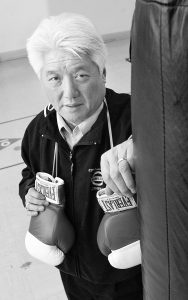 Kai was predeceased by his brother David and nephew Conrad.

Kai was well known as an active member in local, provincial, and national boxing as an athlete and a coach. As a boxer, he competed across the country and was a provincial and national champion. One of the highlights of his career was representing Canada in the 1958 British Empire Games in Cardiff, Wales. He was inducted into the Lethbridge Sports Hall of Fame, the Alberta Sports Hall of Fame, and the Canadian Boxing Hall of Fame. As a coach, he trained amateur boxers at the Lethbridge Boxing Club for 35 years. He was also a part of the Canadian coaching staff at the 1984 Olympics in Los Angeles.

Kai was very active in the community of Lethbridge. He served on the boards of the Lethbridge and District Exhibition and the Rocky Mountain Turf Club. He was also a member of the Chinese Freemasons. He was awarded a Key to the City of Lethbridge in 2010 for his service to the community and local sports. In later years Kai took up painting and did many lovely pictures of his grandchildren, animals, and scenery.

A Celebration of his Life will be held at the ROCKY MOUNTAIN TURF CLUB GRANDSTAND, 3401 Parkside Drive South, Lethbridge, AB, on Tuesday, February 21st, 2017 at 2:00 P.M.

One Condolence for “YIP, Kai”