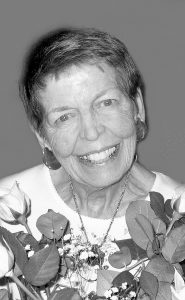 Shirley G. Wilson of Lethbridge, beloved wife of the late Donald G. Wilson, passed away suddenly after a possible CVA on Sunday, February 19, 2017 at the age of 93 years. Born in Medicine Hat in 1923, Shirley moved to Lethbridge in 1926 where she lived the rest of her life. She attended Bowman School and LCI, and after graduation, worked at the CIBC Main branch at the present location of the Bank of Commerce. At 22 she joined the Navy to serve with the WRENs in Sydney, Nova Scotia as a Paymaster. After the war she returned to marry her childhood sweetheart, Don Wilson. In addition to extensive volunteer service to her community, she raised 5 children, contributed to the family businesses, and was active in several organizations. Shirley was responsible for possibly the first recycling program in 1971 (MAYDAY, “Who Me?” decades before recycling became necessary!). She was a candidate for Liberal MLA for Lethbridge West in 1975. She loved to play the piano and volunteered her skills at St Mary’s French Immersion school music program and assisted with the French reading program for 14 years until her passing. Shirley also accompanied the Anne Campbell Singers when they competed at the international choir festival at Llangollen, Wales in 1972. The choir under the direction of Anne Campbell, (Order of Canada) won First Prize for the best female chorus under the age of thirty among two hundred competitors from Europe and North America! She is the current accompanist for Lethbridge Golden Mile Singers, composed of youngsters averaging 75. Living on 6th Ave A So Lethbridge for the last 71 years as “Queen of 6th A”, she regularly canvassed for the Heart, Kidney, Cancer and Stroke foundations. She was a founding member of the Lethbridge Y. W. C. A. An avid gardener, she maintained a large vegetable and flower garden in her yard in which no weeds stood a chance, and harvested hundreds of pounds of raspberries over the years. She walked everywhere for the sake of walking even though she maintained a valid driver’s licence. Shirley turned out to be skilled in business as well. After the retirement of husband Don in 1979, Shirley assumed managership of the remaining family business, Imperial Fashions, an upscale ladies wear started by Ernie Wilson in the early 1920’s. She actually started a second store called the “Clothes Circle” on 5th Street where she accepted used clothing to be sold on consignment. This might have been the first “Thrift Store” which may have started the popular trend we see everywhere today. Shirley encouraged women to get involved in their community and to speak out, to organize and coined her catchphrase, “Silence gives assent”, considered radical in her political life. She always had the good of the community in her heart. Shirl’ was a Mom! She raised 5 kids, suffered the loss of her only daughter Kathy at 12 years old of cancer and of her youngest son Jim who drowned in a recreational accident in 2012 at the age of 51. Three surviving children are Rob of Lethbridge and Alan and John of Edmonton. She has 4 daughters in law: Rosalie, Janice, Kim and Sheryl, plus 4 grandchildren, Scott, Michael, James and Teighan. She was happy to spend time with her entire family, including 2 great great grandchildren, Lillian and Elliott, 5 and 4. Her descendants and everyone who met and knew Shirley remain to mourn the loss of an exceptional, one of a kind matriarch whose humility, generosity, love and strength have also been noticed by literally hundreds of our citizens. In a quote by a good friend, it has been said: “Shirley doesn’t fit any stereotypes. Nobody else thinks for her or talks for her or does things for her. She is totally her own person. There is only one Shirley Wilson and because she is so concerned, so frank, so original, so full of energy, we happen to think she makes an effective representative for all women.” There will be an informal celebration of her life at the LETHBRIDGE SENIOR CITIZENS CENTRE, 500 11 St S, Lethbridge, AB at 2:00 pm on Friday, February 24, 2017 to acknowledge her selfless and unwavering service to this community. In lieu of flowers, donations to the Parkinson’s Society of Canada, 4211 Yonge St. Suite 316, Toronto ON M2P 2A9, would be appreciated.