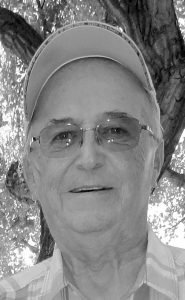 Bill, beloved husband and best friend of Kathy, passed away Thursday, February 16, 2017 at the Chinook Regional Hospital. Loving father of Bill Jr. of Lethbridge and Pat (Dave) Olson of White Sands, AB., he was the only child of Bill and Florence Rollingson. Working in Bill’s Esso Service for his dad during his teen years, he attended college in Bozeman, Montana, and then returned to the service station. Eventually he took a job at Automatic Electric where he met Kathy. Married and settling down in Lethbridge in 1964, he began working for AGT. As Installation and Repair Supervisor, he was transferred to Taber in 1981, residing there until 1988 when he was transferred back to Lethbridge. Bill took early retirement in 1991, but kept in touch with many of his co-workers. Twice a week he met the guys for coffee at Smitty’s, where they were determined to solve all of Telus’ and the world’s problems. Bill lived for those coffee sessions. After surviving electrocution while on the job in 1965, Bill became plagued with many illnesses. He accepted what life dealt him with nary a complaint, and never let his health problems stop him from doing what he loved. Co-founder of the Lethbridge Coulee Kruzers Jeep Club, he spent many weekends jeeping or working on jeeps. He found golf too frustrating to enjoy, but was an avid hunter, fisherman and camper. With his partner Dave Spurgeon, he participated in many walleye tournaments. One of Bill’s passions was tying fishing lures. Bill always treated the family with wonderful holidays. A trip to Hawaii was a highlight, but more to his liking was becoming a snowbird in Arizona. The cruise to Alaska was the last major holiday, but there were many camping trips to his favorite spots at Ridge Reservoir, St. Mary’s and Kalispell, Montana. Bill leaves to mourn his passing, his wife and children, grandchildren Lucas, Eloura and Paul, extended grandchildren Brady (Jess) Olson, Taylor (Lauren Brus) Olson, five great grandchildren, sister-in-law Barb (Marv) Thom, special young friend Chace Wiley and several aunts, uncles, cousins, nieces and nephews. Bill was pre-deceased by his parents Bill Sr. and Florence, grandparents Matt and Mary Sweda, uncle Larry Sweda and most recently his aunt Ursula Sweda. Bill has requested there be no funeral, but agreed a Celebration of Life would be “okay”. Please join us in celebrating his memory on Wednesday, March 8, 2017 at the Eagles Hall, 631 – 13th Street North, from 2:00 to 4:00 pm.

One Condolence for “ROLLINGSON, William”