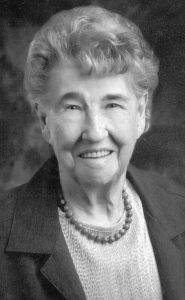 Mrs. Mildred “Irene” Erdman of Lethbridge, beloved wife of the late Mr. Victor Erdman of 17 years, and formerly Wilfred Greene of 31 years, passed away at the Chinook Regional Hospital on February 20, 2017 at the age of 94 years. Irene was born on December 18, 1922 on the farm at Champion, AB to Elbert and Bessie Siler. She received her schooling in the Champion area, graduating grade 12 at the Champion High School. Mom married Wilfred Greene and farmed in Champion, where they started their family. They moved to Lethbridge in 1957 where they resided and completed their family of seven. Mom was very involved in activities at the Evangelical Free Church. After the passing of Wilfred, she became matron of Golden Acres Seniors Lodge. She later married Victor Erdman. After Victor’s passing, she resided at Pemmican Lodge and Fairmont Extendicare. She went to be with her Lord and Savior Jesus Christ on Monday, February 20, 2017. Irene is survived by her sons Wilfred Mervyn (Marion) Greene of Three Hills, AB, David (Hsiuchen) Greene of Taiwan; daughters Donna (Larry) Fletcher of Coalhurst, AB, Sharon (Ron) Boles of Lethbridge, AB, Brenda (Randy) Neufeld of Lethbridge, AB; daughters-in-law Katherine Greene of Wetaskiwin, AB and Fran Greene of Wetaskiwin, AB; 20 grandchildren, 41 great-grandchildren and 2 great-great-grandchildren; as well as numerous nieces, nephews and their families. She was predeceased by her parents Elbert and Bessie Siler, sons Norman Greene of Wetaskiwin, AB, and Earl Greene of Wetaskiwin, AB, sister June (Siler) Burke; brother Lee Siler. Family and friends are invited to pay their final respects between 7:00-8:00PM on Friday, February 24, 2017 at MARTIN BROTHERS FUNERAL CHAPEL, 610 4th Street South, Lethbridge, AB. A Memorial Service will be held at 11:00AM on Saturday, February 25th, 2017 at the EVANGELICAL FREE CHURCH OF LETHBRIDGE, 4717 24th Avenue South, Lethbridge, AB with Pastor Ian Lawson, officiating. Flowers are gratefully declined. Those who wish, memorial donations may be made to Southern Alberta Bible Camp or Gideons. A private family interment will take place in Archmount Cemetery.

One Condolence for “ERDMAN, Mildred”