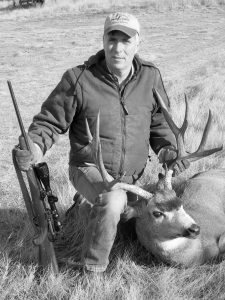 It is with broken hearts that we share news of the passing of our beloved husband and father, Kerry Lenn Kurtzweg. Kerry went to be with his Lord Monday, February 20th at his home south east of Foremost, after a heroic battle with cancer. Kerry leaves behind his loving wife Vanessa, and His children Caitlyn (Tim) Aitken of Bristol, UK, Colton Kurtzweg and Karina Kurtzweg both of Foremost. Kerry is survived by his brother Curtis (Terri) Kurtzweg of Foremost, and his sister Brenda (Ron) Ridder of Lethbridge. His parents in law, Lyle and Karan Gleddie from Foremost, and sisters in law Melissa (Jerry) Steeves of Toronto, and Felicia (Sebastian) Bloem of Vacaville, Calif. Along with numerous nieces and nephews and their families. Kerry was predeceased by his parents David and Ruby Kurtzweg, and Grandparents Samuel and Clara Davies, and Margaret Tracy. Kerry was born July 7, 1963 in Fort St. John, BC, and moved to the farm South East of Foremost in 1969. Kerry grew up enjoying many activities with his family and friends, some of which included motor biking, hunting, and flying. Family was one of the most important teachers in Kerry’s life. His father Dave instilled in Kerry his love of the farm and flying; His mother Ruby taught him the importance of having a personal relationship with the Lord; Grandpa Samuel taught him the love of the outdoors; Curt and Brenda taught him the responsibility and loyalty of family. Kerry was a hard worker, and an avid learner of anything to do with business. The farm and the cattle challenged him, and he was always looking for the better/more efficient ways of doing things. It was also the people that he loved. He said, “Farm and Ranch people are the best to work with, always helping each other, and always friendly.” Kerry enjoyed working with young people in the church, and employed many over the years. He said that challenging them and seeing them succeed always gave him a great deal of pleasure. People in general were important to Kerry. He always made time to get to know people, not superficially, but genuinely. Many friends became “family”. On February 22, 1992 Kerry married Vanessa Gleddie, and they started a wonderful, and loving journey together. The Lord blessed them with 3 kids: Caitlyn, Colton, and Karina; then their adventures increased! Kerry’s deep love for Vanessa and the kids influenced each decision, he wanted to be the best provider for them, and would faithfully ask the Lord for guidance. Kerry has left his family with so many precious, treasured, and side splitting memories that through our recollections he will always be with us. His hope was in the Lord, and because of that we can say, “Till we meet again.” Friends and family are invited to pay their final respects from 3:00pm – 5:00pm on Friday, February 24, 2017 at MARTIN BROTHERS RIVERVIEW CHAPEL, 610-4th St. S., Lethbridge, AB. A Memorial Service will be held at 1:00pm on Saturday, February 25, 2017 at FOREMOST COMMUNITY HALL, 801 1st Ave. W., Foremost, AB. In lieu of flowers, those who wish may make memorial donations to Orphanage Place of Hope, Cayes, Haiti -Payable to EENA c/o Jacques Forge, 214 Belainsky St.- Basile-le-Grand, Que J3N 1E1

One Condolence for “KURTZWEG, Kerry”