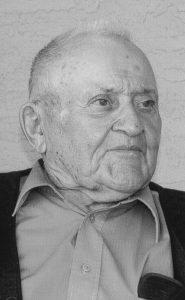 It is with great sorrow that we announce the death of FRANK BARTOSEK, beloved husband, father, grandfather and great grandfather, who passed away February 24, 2017 at the St. Michael’s Health Centre.

Frank was born August 27, 1921 in Liderovice, Czechoslovakia and emigrated with his family in 1926 to begin a new life in Raymond. He joined the Royal Canadian Air Force in August 1942 and served until September 1945. After his time in the Air Force he worked for Roger’s Sugar, Depew Ranch, County of Warner and then farmed mainly sugar beets in the Raymond area. Frank enjoyed playing hockey with his brothers Steve and Jerry, fastball with the Church Knights, enjoyed rodeo and volunteered every year running chutes at the Raymond Stampede. He was an avid curler and golfer. In his later years he was very involved with the Legion, 60 Plus Club and the Knights of Columbus, which he was still a member of at the time of his passing. Frank could be seen driving his 1989 white Mercury Grand Marquis to the various events as late as December 2016. In 1963 Frank married Anna and began farming in Raymond, they then moved to Monarch area in 1969 and continued to farm until they retired in 1988 and finally moved to Lethbridge. Frank was predeceased by his wife Anna on February 21, 2011, as well as his son Ted Magierowski, his parents Frank and Frances, brothers Joe, Steve, Jerry, his sisters Mary, Stella, Jenny, Ann and a baby sister Lydia after her birth.

A Funeral Mass will be Celebrated at OUR LADY OF THE ASSUMPTION CATHOLIC CHURCH, 2405-12th Avenue South, Lethbridge, AB on Thursday, March 2, 2017 at 10:00 A.M. with Father Kevin Tumback, Celebrant. Luncheon will follow at the Assumption Church Hall. Interment will follow at the Temple Hill Cemetery, Raymond, AB.

In memory of Frank, contributions may be made to the Canadian Cancer Society, 317-10th Street South, Lethbridge, AB T1J 2M7.

Our family would like to extend many thanks to the staff at the Chinook Regional Hospital and St. Michael’s Health Centre for their incredible care during Frank’s stay, as well as a huge thank you to his family doctor, Dr. Colin Walsh, for his care and compassion.