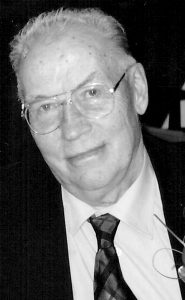 Born in Lethbridge in 1927, Loren showed an early flare as a daredevil. As a baby riding swaddled in his mother’s arms in the Model T Ford, the car hit a rut in the gravel road causing Loren to fly out. Mother dashed back to find a bundle in the middle of the road of furiously churning legs kicking the blankets and a smile on Loren’s face! Childhood began by patrolling the irrigation canals of the Lethbridge Northern Irrigation District with “Ditchrider” father. After receiving their 47 cent check, the family decided better to start irrigation farming near Iron Springs where coyotes and jackrabbits roamed coulees and prairies between the Oldman and Little Bow Rivers. Loren grew up amidst tough frugal times with long hours of toil, defending Canada’s breadbasket, growing food for a country at war. Chinook winds and dust storms were so severe that geese were reputed to fly backwards to keep sand out of their eyes!

Loren quit school after Grade 9 to help farm. Lack of education was more than made up by impeccable skills in time management, shrewd financial decisions, astute common sense and, willingness to learn lifelong. He became an extraordinary farmer, up to the challenge for complex mixed farming, tending many types of livestock, nurturing diverse crops, repairing all machines. Soils were tilled with science and a doctor’s precision, seeds planted in the straightest rows, all plants quenched with water, every cow, pig, chicken and turkey fed and watered daily and tended when ill. He was an ethical farmer, who would tend weak animals and prune beautiful groves of fir trees. When supplies were short, he could start a vehicle with a dead battery, replenish a burned fuse on a stranded sugar beet truck, flow water to a herd of thirsty cattle at 40 below zero and construct buildings from scratch. Farming was not just a business but a revered way of life. Loren was an innate care giver for many living beings.

Loren met Mary Jean and married her in 1952. He and she were devoted mates for life like Canada Geese. Together with Mary, he forged life on the farm and they raised 4 children, teaching so much wisdom. Loren was a father with high expectations for his children to do their chores and ready to discipline if work was poorly done. But he was gentle: tears in his eyes the day when the hay mower passed over the mother duck sitting in the field on her nest ; encouraging Ann and Rose to footraces until they became elite provincial athletes whom he could not beat then cheering them from trackside training; farming with his son Keith, who pursued his career as an Agronomist, and encouraging Garth as he became a renowned Surgeon and researcher in Diabetes: training Shep the German Shephard cross to do all kinds of tricks, including an astounding balancing act jumping on the back of any person who cared to volunteer their posterior; putting glorious Christmas lights annually on the growing fir trees. Loren never ridiculed any person of minority status or another faith or health challenge because he respected their rightful beliefs or challenges.

Loren cared about community. He served as a dedicated telephone repair lineman. He chafed at the “rubbernecking” by listeners on those rural party lines especially when he wanted private business on a phone call. But, he was known to listen too! He received a pin as a 25-year member of the local Sugar Beet Growers. He was a whiz with the financials of the family corporate farm. He supported local outdoor farm auctions. One day enroute to the auction he quickly stashed a lunch of salt herring in his pocket only to find everyone staring at him as dozens of dogs came to greet and sniff the aromatic herring in his pants. With his effacing sense of humor, he proclaimed himself “dog’s best friend”.

Loren always welcomed his growing grandchildren with open arms, sharing natural farm secrets. He loved Polka music and waltzes and could dance them well, especially when it was the Emeralds playing. He loved to fish for pike. He and Mary were annual snowbirds to Nevada or California where they relished sensible gambling and driving freeways. He loved grapefruit, chocolate, Crackling Oat Bran, dill pickles and juicy steaks.

In 2006, he and Mary retired from the farm and enjoyed 7 years of retirement then moved to a Calgary retirement home. A cruel progression of Parkinson disease and Dementia robbed Loren of his independence. But there was still a smile and his trembling hands clapped when a polka was playing. If you brought a box of chocolates, he still opened the package and always offered everyone a piece before he helped himself. His blue eyes always welled with tears as we looked back after each visit.

The Funeral Service will be held at McKillop United Church, 2329 15 Ave S, Lethbridge, on Saturday March 4, 2017 at 2:00 p.m., with Reverend Trevor Potter Officiating.

In lieu of flowers, donations may be made to the local chapter of the Parkinson or Mental Health Association.