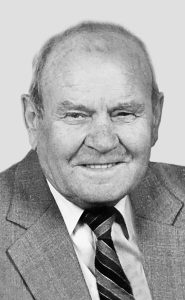 STJEPAN KOSTECKI, beloved husband of late Marija Kostecki of Lethbridge, passed away at St. Therese Villa in Lethbridge, Alberta on Saturday, February 18, 2017, at the age of 84 years.

He is survived by his daughter Bozena Kostecki and her children, Jonathan Ruzek (Melissa) of Lethbridge and Jessica Ruzek of Halifax, and daughter Marijana Turuk (Zvonko) and their children, Anamaria Turuk of Lethbridge, Tasha (Jesse) and Ethan Turuk of Taber.

Stjepan was predeceased by his wife of 66 years, Marija, their four infants Vlado, Blazenka, Emil, and Milivoj, his mother Bronislawa, father Stjepan, and his brother and sister.

Stjepan was born on March 15, 1932 in Repusnica, Croatia. He came from humble beginnings, and hardship was a part of his early life. At age 11, he joined the Yugoslav Partisans (National Liberation Army) and fought against the Nazi invasion during World War II. He would often reminiscence about his experiences as a young courier, dispatching messages across enemy lines from one unit to another, usually by himself and under the veil of night. He encountered life or death moments, and was even shot. He would later speak that fear, hunger, frostbite, and lice were his only friends, though, fatefully, German soldiers once saved his life.

After the war, he worked alongside many other young people to build the Brotherhood and Unity Highway that stretched over 1,182 km across former Yugoslavia. When he was 17, he met the love of his life, Marija Pergar; they married a year later, and remained together for the rest of their lives. Stjepan and Marija lived in the village of Repusnica where they had six children; however, only Bozena and Marijana survived.

Stjepan and Marija started their life together with very little. Building a house using bricks made by their own hands, they created their new home and began their family. They worked long and hard, waking before dawn to toil on their plot of land and in their vineyard. Stjepan would then head off to work at the oil company, while Marija worked as a seamstress in the village.

In 1975, Stjepan and family immigrated to Canada to start a better life, moving to Lethbridge where they began anew. He worked many jobs, ranging from maintenance, construction, and tile setting. It was a workplace injury that caused him to retire early on compensation.

Whenever anyone needed help, Stjepan would humbly lend a hand. He was always quick to help those around him with generosity and without question or judgment. All were welcome to his and Marija’s table for rakija or wine (usually both), as well as Turkish coffee and spit-roast pig. His and Marija’s experiences before and during the war made them sensitive to anyone’s suffering, and though they did not have much, neither Stjepan nor Marija ever turned anyone away. It was a mark of their understanding, hospitality, and kindness to provide support to anyone who needed it.

One of Stjepan’s favourite pastimes in life was gardening, and tending to his vegetables, apple trees, and grape vines. You could also find him in his garage distilling rakija or fermenting wine. Both he and Marija enjoyed listening to Croatian music, and together they shared stories and memories from back home that accompanied each song. They did so until her passing on December 31, 2016.

Stjepan now joins his departed wife, and will be woefully missed by Bozica, Maja, and his grandchildren, as well as by his family and friends in Canada and Croatia. Neka ti je laka zemlja, Deda.

A Private Family Interment will be held at Mountain View Cemetery at a later date.