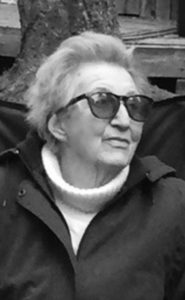 RITA CHRISTMAN, of Lethbridge, passed away at St. Michael’s Health Centre – Palliative Care Unit on Sunday, February 26, 2017 at the age of 83 years.

She was predeceased by her sister Trudy Goldenbeld, brother Fred Kruitbosch and her parents Hendrick and Gerrheritdine Kruitbosch.

Rita was born on January 12, 1934 in Holland and immigrated to Canada in 1949. She eventually settled in Southern Alberta and worked on her family’s farm outside of Monarch. Prior to moving into the town of Monarch she was blessed with three children and from there they settled in Red Deer for close to ten years. In later years, she returned to Lethbridge where she resided until her passing.

She loved spending time with her family and her grandchildren were the twinkles in her eye. During the spring and summer months you could always find her outdoors going for walks or in her garden, keeping busy tending to her many varieties of flowers including petunias, geraniums, roses and sunflowers. Rita found many hours of enjoyment with her cats and dogs, especially her devoted companion, her Irish Setter, “Red”.

As per Rita’s wishes, no formal Funeral Service will be held. A private family gathering will be held at a later date.

In memory of Rita and in lieu of flowers donations may be made to the SPCA.