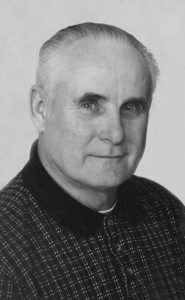 GERD SCHMIDT, beloved husband of Elaine, passed away at the Chinook Regional Hospital in Lethbridge on Wednesday, February 22, 2017 at the age of 82 years.

Along with his wife Elaine, he is lovingly remembered by his daughters, Jennifer (Tim) and Gwendolyn (Mike) and grandchildren, Sierra and Tanner. Gerd will be missed by many including special friends, Dixie and Dominic.

Gerd was born in Berlin, Germany on November 24, 1934. He arrived in Canada in 1955 and settled in Chamberlain, Saskatchewan as a farm worker. He met Elaine in 1966 while working construction in Chaplin, Saskatchewan. They were married in 1968 and later moved to Claresholm, Alberta where they remained residents for 45 years.

Gerd enjoyed going for coffee with his friends, who called him by his nicknames “Yogi,” “George,” or “Grampa.” He always enjoyed a good argument, curling, the Saskatchewan Roughriders and barbecuing with a cold beer.

Gerd’s family would like to thank the Palliative Care Team at St. Michael’s Health Centre for their special care and attention in his final days.

At Gerd’s request, no formal Funeral Service or Visitation will be held. He will be laid to rest at the Archmount Cemetery at a later date.