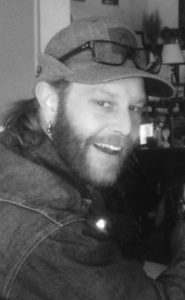 It is with immense grief and sadness that we announce the sudden passing of JASON ROBERT TAYLOR, more affectionately known to us all as “JT”.

He was the soul mate to Sage Bruder, and is lovingly remembered by his mother Laurie-Ann Taylor (Terry) of Pincher Creek and his sister Lisa Taylor (Pat) and nephew Phoenyx Taylor of Lethbridge, AB. He is also survived by his aunt Mona-Rae Black and cousins Jim (Tia) and family, Donna (Tyler) and family, and uncle Bob Black. Aunt Vicky-Lynn Coates and cousin Amy.

Jay was predeceased by his father Robert John Taylor of Pincher Creek, AB in 2009 and his best friend, his Dalmatian Whiskey, which he rescued years prior.

Jay was born December 6, 1982 in Pincher Creek, AB where he attended school and had numerous accomplishments from his successful welding company, T & H Welding. He also took pride in everything that he did.

Jay enjoyed spending time with his numerous friends and always had a contagious smile that lit up the room and always had a joke to go along with that. After he met Sage, he gained a passion for their cows and horses and little Marshall. He enjoyed everything outdoors from camping, hunting, fishing and his greatest pride was the ball team that he sponsored and played on (Off Constantly).

He loved being in with nature on his dirt bikes, going for drives and hunting. He would always say “safety first” and had his favourite hunting partners Collin Reners and little Jaxon with him.

Jay’s happiness was infectious and impacted all the people he knew and loved. He dedicated himself to the happiness of others and would never accept a favor in return. When anyone needed help Jay would humbly lend a hand.

In lieu of flowers and in memory of Jay, donations can be sent to Angels Within Us, Pincher Creek Foundation: angelswithinuspc@gmail.com