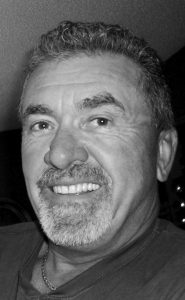 TIMOTHY PATRICK HANLON was born November 8, 1950—smack dab in the middle of the 20th century in North Vancouver, BC. Tim died March 12, 2017 at home in Lethbridge after a too brief encounter with lung cancer (non-small cell adenocarcinoma, not from smoking, just bad luck).

Tim leaves behind his devoted wife, Nicki Leighton who was his unwavering and selfless companion and caregiver during a terrible illness. Despite his devastating diagnosis, together Tim and Nicki forged their own path through the final months of Tim’s life.

Tim’s career in the agricultural industry started in 1975 as a New Holland territory manager. In 1976, he moved to Coaldale and went to work for Mustang Machinery in Lethbridge until 1978. Then he opened Orange Power in Taber in 1978 to 1984. In the fall of 1984, he started Hanlon Ag Centre in Lethbridge. Hanlon Ag was an Allis Chalmers and Gleaner dealer. In 1991, they took on the Hesston line, which started a new chapter for Hanlon Ag. The Hesston hay and forage line became the backbone to the success of the company. A few years later in 1993, they acquired the Massey Ferguson line and then the Fendt line in 1999. Tim participated in and enjoyed a four year term as a Hesston dealer panel member representing Western Canada dealers from 1993-1997. He was a successful and respected businessman in the Alberta agriculture industry for over forty years. Friendships, both personal and professional, were an essential part of his life.

His lifelong passion was expressed on the baseball diamond—as enthusiastic player, coach, manager or spectator. In his adolescent years, he was an excellent pitcher, and in his later years, he devoted many hours to slow-pitch with teammates in Surprise, Arizona and Kalispell, Montana. During Tim’s more than twenty snowbird winters, his batting average seldom dropped below .700. He was a diehard Yankees fan, if they were winning.

His other interests included golf, making beef jerky and sharing it, automobiles, gardening, barbecuing and having a beautiful lawn. He was a genius at remembering sports stats. Listening to music was a joy for Tim throughout his life and a consolation during his illness. Check out the YouTube video, Just Breathe by Willie Nelson and his son, Lucas.

Thanks to all the health care workers at the Chinook Regional Hospital and Jack Ady Cancer Centre who cared for Tim. Tim and Nicki felt blessed by all the prayers and good wishes they received during this most difficult time.

At Tim’s request, there will be no funeral or memorial service. Condolences may be forwarded to cornerstonefuneralhome.com. If friends so desire, memorial tributes can be made directly to the www.lungcancercanada.ca.

Tim will be loved and remembered by friends and family for his generosity, kindness, dry sense of humor… and his prowess on the diamond.