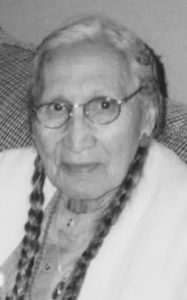 Iitsstsi’nikki transitioned into the spirit world on March 10, 2017 at the Cardston Health Centre at the age of 95 years.

Iitsstsi’nikki—the youngest child of Tom Prairie Chicken (Imiitaoh’sokoi) and Sleeping Woman (OoKakii)—was born on November 23, 1921, on the Blood Reserve. Her mother died when she was four, so Iitsstsi’nikki was raised by her maternal grandfather, Samakina (Spear Chief), and grandmother, Akaikamoos’sakii (Many Stealing Woman), in the Old Agency community. Iitsstsi’nikki was a member of the Tall People clan.

She attended the St. Paul’s Residential School and left at the age of 18 years. She worked in the housekeeping and restaurant industry in Fort Macleod for 26 years. When she retired, she became involved with pow wows. She learned to bead and make beautiful moccasins for herself, her children, her grandchildren, and many others. She also loved going to bingos and travelling.

Iitsstsi’nikki lived a long life, and saw her world transform from the horse and buggy days to the modern world. She grew up in a very traditional and ceremonial family and was able to pass on a rich legacy of cultural knowledge and values. She was able to integrate both her traditional and Christian beliefs into her life. These past two years while she was a resident at the Kainai Continuing Care Centre she was able to talk with a couple of her grandchildren through Skype and Facetime.

The family would like to thank the doctors and nurses who took excellent care of Iitsstsi’nikki during her brief stay in hospital as well as the staff at the Kainai Continuing Care Centre.

The Family Service will be at Legacy Funeral Home in Cardston, AB on Sunday, March 19th from 5:00 – 6:00 p.m. followed by the Wake Service at the Old Agency Community Hall, Blood Reserve from 7:00 -11:00 p.m. There will be a feast at the Wake Service. The Funeral Service will be at the Old Agency Community Hall on Monday, March 20th at 11:00 a.m. Interment in the St. Catherine’s Cemetery.