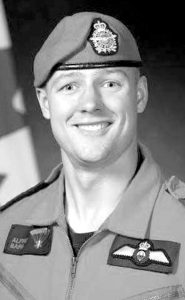 Master Corporal Alfred Ernest Barr went to be with his Heavenly Father March 8th, 2017 at the age of 31 years. He passed away in the vicinity of Yorkton, Saskatchewan doing what he loved: “jumping out of airplanes in an orange onesie,” as a qualified Search and Rescue (SAR) Technician. He is predeceased by his father Edward Barr, and is survived by his fiancée Stephanie Hempel, mother Sharon, sisters Tanya (Shawn) and Kaitlin, and nieces Aviana and Elsie. Alfred was born in Prince George, British Columbia on May 22nd, 1985. He spent the majority of his childhood years in the rugged beauty of Northern B.C. in a town called Fort Nelson. In 2002, Alfred was nominated by the Rotary Exchange Program to complete his 12th grade of high school in Denmark. This is where his love of exercise, discipline, and family heritage began to grow his character. Once back in Canada, Alfred moved with his family to Lethbridge, Alberta in 2005. There he obtained a diploma in Culinary Careers at Lethbridge College and became well known as an accomplished ultra-marathon runner, placing first in 2007. His summers were spent working as a chef in Waterton National Park, a place where he truly connected with creation. There he met his kindred spirits Andrew Primavera and Jon Green. In 2010, he joined the military, starting first as a Signal Operator, and worked his way towards his lifelong dream of becoming a SAR Tech. In 2011, he met the love of his life: Stephanie Hempel. Many would agree that their relationship was defined by passionate love that endured the hardship that comes with long distance. They were woven together by letters sealed with wax, and their shared love of poetry and music. They got engaged the Christmas of 2015, geocaching in his beloved coulees in Lethbridge. He graduated as a SAR tech the summer of 2016, and was posted to Winnipeg where he was finally able to be with his love, Stephanie. His last months were full of adventure, challenges, learning and growing, much like his entire life. Alfred was a creator and teacher. He was disciplined, humble and determined. He made dreams become realities, and no one could ever take his place. “Most of us hold the dream of becoming something better than we are, something larger, richer, in some way more important to the world and ourselves.” Louis L’amour in Education of a Wandering Man. A Memorial Service will be held at 1:00pm on Wednesday, March 22, 2017 at ST. AUGUSTINES ANGLICAN CHURCH, 411- 11 Street South, Lethbridge, AB, with Canon James Robinson officiating. Interment will follow in the Mountain View Cemetery-Field of Honor. In lieu of flowers, donations can be made to Search and Rescue Volunteer Association of Canada (SARVAC), 24 McNamara Drive, Paradise, NL A1L 0A6 or to Veterans Emergency Transition Services (VETS) Canada, PO Box 214, 53 Queen Street, Dartmouth, NS B2Y 3Y3.