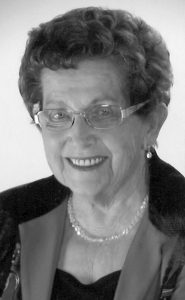 Margaret Wiebe passed into the presence of her Lord and Savior on March 13, 2017 in Calgary, Alberta at the age of 87 years. Margaret will be lovingly remembered by her birth children; Richard (Carol) Siemens, Stanley (Cordie) Siemens, Beverly (Bruce) Campbell and Carrie (Brent) Keough; step-children Shirley (Paul) LaFrance, Chris (Cliff) Ivy, Ken (Noellie) Wiebe. She also leaves behind two sisters and one brother; grandchildren, great grandchildren and many friends. Margaret was born in Gem, Alberta to Henry and Helen Warkentin. She married Ernie Siemens in 1949 and they were blessed with four children. Ernie passed away in 1990. She later married Henry Wiebe and they resided in the Lethbridge area for several years before moving to Airdrie, Alberta. Henry passed away in 2013. Margaret loved to care for others and always sought to see the good in them. She will be remembered for her love for the Word of God and prayer. Her faith was clearly evidenced as she trusted in the Lord even though life may be difficult. She will be deeply missed by those who knew her. A Celebration of her Life and Memorial Service will be held at 2:00pm on Friday, March 24, 2017 at MARTIN BROTHERS RIVERVIEW CHAPEL, 610 4 St. S., Lethbridge, AB. A private family interment will take place in the Coaldale Mennonite Cemetery.