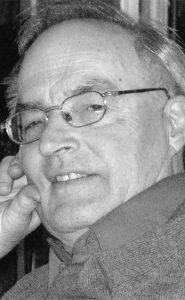 Ernest LeRoy (Roy) Litchfield passed away on March 20, 2017 in Magrath, AB at the age of 89 years. He was born in Raymond, AB to Ernest and Minnie (Burrows) Litchfield. He was the second of five children, and grew up surrounded by a large and close-knit extended family. He was predeceased by his first wife Barbara (Gray) Litchfield, and is survived by his daughters Carolyn (John), Beverly (Ian), and Gwen; son Jon; grandsons Justin and Thomas; and his wife Sue (Chorney) Litchfield. Roy graduated from the University of Alberta with a degree in chemical engineering, and later went on to earn a diploma in business administration from the University of Western Ontario. He began his career working in the petro-chemical industry at Polymer Corp. in Sarnia, ON. He then took a job with the federal government at the Department of Regional Industrial Expansion in both Saskatoon and Ottawa where he worked until his retirement. Later, he and Sue relocated to Kelowna, BC before moving to Magrath in 2009. Roy was a faithful member of The Church of Jesus Christ of Latter-day Saints. He was called as a missionary to the Eastern Canada Mission, and served the church in many capacities including bishop, counselor in stake presidency, regional welfare representative, family history consultant, and temple worker. Of particular note was his thoughtful and diligent service as a home teacher. Although Roy’s career saw him living in various parts of the country, he never lost his love for Southern Alberta. He always spoke fondly of his early life on the family farm and loved working at the Raymond Mercantile as a teen. His rural upbringing fostered an appreciation for the outdoors. Over the years he enjoyed a variety of activities such as camping, golf, photography, and was an ardent baseball fan. His yard was often admired, a result of his passion for gardening and landscaping. Friends and family were frequently treated to his abundant crop of tomatoes. A funeral service will be held on Monday, March 27th, 2017 at 11:00am at The Church of Jesus Christ of Latter-day Saints, Magrath Stake Center, 21 East 1 Ave S, Magrath. Friends may meet the family prior to the service at the church from 10:00 to 10:45am. Interment to follow in the Temple Hill Cemetery, Raymond. Those who so desire may make memorial donations in memory of Roy to the Multiple Sclerosis Society of Canada.