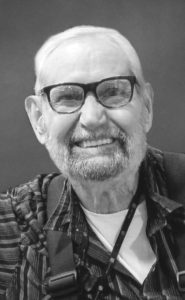 JOSEPH WILFRED COOK passed away on March 23rd, 2017 in Lethbridge at the age of 84 years.

Joe was born in Drumheller, Alberta on February 8, 1933. He attended school in East Coulee and New Dayton. Joe was handed some challenges in life but he never let that stop him from working hard at various jobs throughout his life. In fact, he was a fighter right to the end.

Joe was unable to drive so his means of transportation was his bicycle, going from a two-wheeler to a three-wheeler and then finally a four-wheeler. His bicycle took him to work, fishing at Henderson Lake and anywhere else he desired. He had a small tool box with the essential items and if his bike needed to be repaired he was capable of doing so. Joe’s four-wheel bike was his door to freedom and he loved it. Joe, you can now ride forever!

Joe was predeceased by his parents, Aaron and Mary Cook, infant brothers Aaron and Jerry and his sister-in-law, Beatrice Cook.

The family will be holding a private celebration of Joe’s life.