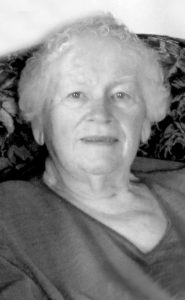 It is with great sadness that we announce the passing of Anita “Joan” Jones (nee White) of Lethbridge on March 25, 2017 at the age of 80 years. She is now reunited with her husband, David “Tubby” Jones, who passed away in 1967. Joan is survived by her two children; Cathy (Darcy) Fritz and Rob (Laurie) Jones; grandsons, Ryan (Jill), Logan (Beccy), Jason (Ahmani), Riley, as well as a great granddaughter Emma-Jean. She also left surviving her brothers Gary (Letty-Lynn) White and Brian White; sister-in-law’s Helen White, Ivy Chenger, Evelyn Jones as well as several nieces and nephews. She was predeceased by her parents Bill and Flossie White of Carmangay. AB, her oldest brother, Ben, of Lethbridge and many other beloved in-laws. Joan will forever be in our hearts and will be greatly missed. A special thanks to the Intensive Care Unit at Chinook Regional Hospital. In keeping with Joan’s wishes, a Graveside Service for family and close friends will be held at 11:00am on Saturday, May 27th at MOUNTAIN VIEW CEMETERY in Lethbridge. A Reception will follow at Nord-Bridge Senior Centre, 1904 13 Street North, Lethbridge, AB. Flowers are gratefully declined. Those who wish, memorial donations may be made to the Canadian Diabetes Association, 204 2323- 32nd Avenue NE, Calgary, AB, T2E 6Z3, or the Heart & Stroke Foundation of Alberta, Box 2211, Lethbridge, AB, T1J 4K7.