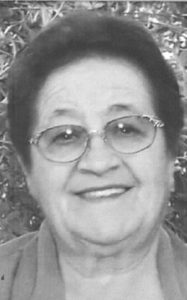 We sadly announce that our dear mother Mrs. Antonietta Altieri of Lethbridge, beloved wife of the late Mr. Marco Altieri, passed away peacefully at the Chinook Regional Hospital on Wednesday, April 5, 2017 at the age of 89 years.

Born and raised in Sessano Italy, Antonietta immigrated to Canada in 1952 with her husband and young daughters and eventually settled in Lethbridge in the early 1960’s. Antonietta was employed with St. Michael’s Hospital and later at Sifton House as a Child Attendant until her retirement. Antonietta’s many interests and talents included crocheting, needlepoint, sewing and her love for gardening. There was not a vegetable or flower that didn’t grow under her watchful eye. She was a caring and generous person, and her home was always warm and welcoming. Antonietta’s grandchildren and great grandchildren were the love of her life. She also had an amazing wit and sense of humor that she used to entertain all of her new friends at Martha’s House.

Besides her late husband Marco, Antonietta was predeceased by her parents Maria and Donato D’Ippolito.

If friends so desire, memorial tributes in Antonietta’s name may be made directly to a charity of their choice.

One Condolence for “ALTIERI, Antonietta”