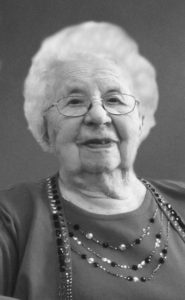 ELIZABETH “LIZ” SALAMONAug. 28, 1914 – Apr. 4, 2017
After a long and rewarding life, Elizabeth passed away peacefully in her 102nd year, at the Fairmont Extendicare, her home for the past five and a half years.
Liz was a devoted and treasured Wife, Mom, Grandma and Great-Grandma, who left a legacy that her family will always strive to uphold.
Elizabeth is survived by two daughters who cherish her memory; Lorraine (Lucien) Bruyckere and Eileen (Edward) Ivanics. She will always remain in the thoughts and prayers of her three grandchildren; Dean (Claudia) Bruyckere, Colleen (Brent) Leadbetter, and Myrna-Jean (Dann) Burroughs. She will also be lovingly remembered by her seven great-grandchildren: Chandler & Richelle Bruyckere and Dylan, Austin & Easton Leadbetter and Emma & Ethan Burroughs. Liz is also survived by her brother Robert (Ada) Toth as well as numerous nieces and nephews.
She was predeceased by her beloved husband Andy in 2004, who she adored , and was by his side throughout their lives together of 69 years. Besides her husband, she was predeceased by her parents Julia and John Toth, two brothers, three sisters, seven sisters-in-law and ten brothers-in-law.
In 1939, Elizabeth joined Andy in Lethbridge and found employment at a restaurant earning $15.00 per month, including room and board. This “position” included; cooking, serving, dishwasher and drier, cleaning (which extended to the washrooms) and anything else that had to be done. Besides her full time restaurant job, Liz had a number of weekly affluent clients doing housekeeping and also took in washing and ironing to keep the savings account growing.
In 1947, Elizabeth and Andy were able to purchase one section of land east of the Milk River/Warner area which was the start of their long and outstanding farming career. Some of this land had to be broken, so whenever she could manage a bit of time away from her other jobs, she would be by Andy’s side breaking the land. About this time, they also felt it was a wise idea to become owners of a Rooming and Boarding House, providing the necessities of a semi-home life to 15 men, some of whom were in the Canadian forces and a number of Chinese Chefs who ran the kitchens of some of the best Chinese restaurants in Southern Alberta.
Elizabeth was widely known for her spectacular flower and vegetable garden, which she shared with family, friends and the strangers who would stop and admire the fruits of her “green thumb”, asking for plant clippings, which she was more than happy to provide. They would leave with their clippings along with a bag of fresh veggies or raspberries. She was a fabulous cook and her Hungarian pastries were enjoyed by anyone who was fortunate enough to have her pop over to their home and leave you a treat, or better yet, visit and sit at her table.
We wish to extend our thanks to the staff of 2nd West at Fairmont Extendicare, especially those who were with her daily, for the compassionate and loving care they provided Mom over these past years.
A Funeral Service will be held at CORNERSTONE FUNERAL HOME, 2800 Mayor Magrath Drive South, Lethbridge on Saturday, April 15, 2017 at 11:00 A.M. with Rev. Larry Hankinson, officiating.
Interment to follow in the Mountain View Cemetery.
In lieu of flowers, if friends so desire, memorial tributes may be made to the Alzheimer Society, #402, 740 – 4 Avenue South, Lethbridge, AB, T1J 0N9.
To send a condolence, please visit www.cornerstonefuneralhome.com