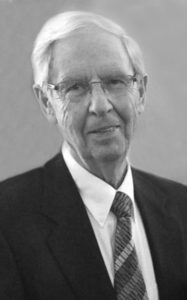 Hermanes “Herman” Konynenbelt, beloved husband of Carol (Bos) passed away peacefully on April 15, 2017. He was 83 years of age.

Dad was born on January 4, 1934, on the family farm near Nobleford, Alberta. He enjoyed life on the farm, particularly at harvest time. He often looked forward to hunting pheasants after the chores were all done. He was a true prairie boy, whose roots were firmly planted in the Southern Alberta soil of his birth.

While at an International Bible Camp in Waterton in 1955, Herm noticed and fell in love with a lovely young lady from Montana. Thus, began Herm and Carol’s long-distance relationship. Later that year, God called Herm to pursue further studies at Calvin College in Grand Rapids, Michigan. Carol enrolled at Calvin the following year. They both graduated in 1959 with Education degrees, and were married that summer. They were blessed in their marriage with 2 daughters and 3 sons.

Dad served as a teacher and administrator in Christian Schools, first in Edmonton and then in Lethbridge. He was passionate about and dedicated to participating in Christian education. “Mr. K” touched the lives of many students, parents, fellow staff and school community members.

Dad enjoyed fishing, golfing, woodworking, renovating, camping, yardwork, singing in Men’s Choir, and cooking a delicious Sunday roast. Dad loved his children and grandchildren, taking a keen interest in their schooling, activities, and accomplishments. He treasured every visit and phone call from his family, and eagerly looked forward to every opportunity to gather all together.

Dad’s faith in his Lord and Savior was a clear testimony to his family and friends. He spoke often with us all of his love for Christ, and his faith was abundantly evident to us all in both his words and his actions. Dad’s roots were also firmly anchored in the rock of his salvation.

Dad is predeceased by his parents Henk and Dena Konynenbelt and Carol’s parents Joe and Cora Bos.

We will all miss the twinkle in Dad’s eye, his quick wit, his keen reflective mind, and his gentle, generous, loving heart. He was our precious treasure – husband, father, grandfather, brother, cousin, uncle, teacher, friend. Our arms long to hold him, but we rejoice that he is now in the loving, everlasting arms of his Lord and Savior.

Family and friends are invited to pay their final respects between 5:00pm – 6:00pm on Friday, April 21, 2017 at the MARTIN BROTHERS RIVERVIEW CHAPEL, 610 4 Street South, Lethbridge Alberta.

A Graveside service will be held for family and close friends at 11:00am on Saturday, April 22, 2017 at the NOBLEFORD CEMETERY, Nobleford, Alberta.