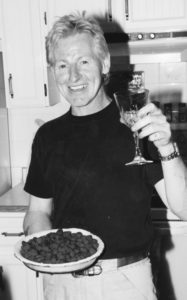 Stephen George Giddings
April 29, 1954 – March 6, 2017
While living his dreams of retirement on Vancouver Island, it is announced with great sadness that Steve Giddings, loving Father of Liam Guenther of Lethbridge, passed on peacefully in his home in Bowser, BC on March 6, 2017 at the age of 62 yrs.
Steve was born the eldest of 3 children to George and Jean Giddings in Glynneath, Neath, Wales, where he grew up happily and eventually completed his apprenticeship as a welder. Though ever the Welshman, in 1976 Steve followed his heart and adventurous spirit as he emigrated to Alberta, Canada. After eventually receiving his teaching degree in Edmonton, Steve lived and worked as a high school and college teacher, a welder and small business owner in various towns and cities from 1 end of Alberta to the other, though he primarily resided in Fort McMurray, Lethbridge and even back to Wales for few years.
Steve was passionate about teaching, he also developed high school welding curriculum and he was proud that there were many students who were inspired to follow a career into the trade. Steve’s no nonsense yet knowledgeable and conditionally friendly approach in the classroom earned him the respect of his students.
Just prior to his sudden passing, Steve told a friend that he felt as though he had lived 3 lifetimes and anyone who knew Steve would certainly agree that he was a man full of wonder and a love for life. One of Steve’s great passions in life was music and he played drums in many bands throughout the years. Steve also loved fly fishing, his BMW, Judge Judy, travel, artistic welding, his many friends and close family and most important to Steve was his son Liam, who was born in Sylvan Lake in 1998.  Steve was never too busy to take Liam camping and fishing, to soccer tournaments or to share stories and his unique perspectives of life and politics with his son.
Steve will be forever missed by his many close friends and family; adoring Mum Jean (Mac Rae), sister Mandy Davies (George Lawrance) , brother Nigel Giddings (Claire Davies)  and extended family in the UK as well as his loving son Liam and his family in Lethbridge. Steve was predeceased by his Dad George in Wales in 1994. A service honoring Steve’s life was previously held in Courtenay, BC on March 16, 2017 and in Glynneath, Wales on April 6, 2017.
People are invited to please remember Steve and share their memories and pictures of him online at www.piercysmtwashingtonfuneral.com