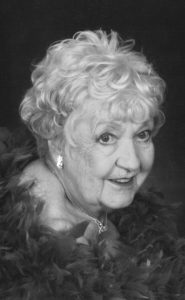 HAHN STOWELL gently left this world April 27 in her 93rd year. Born in Holland, she met and married an Alberta born soldier (Ken Stowell), moving to Ponoka in 1946. Her son Randy (Gloria) Stowell, her daughter Marlene (Richard) Tanaka were Alberta born and her adopted daughter Jackie Stowell was born in Manitoba.

Married life included ranching in Alberta, and when her husband became an Indian Agent in 1954, she nurtured her family on reserves in Alberta, The Northwest Territories and Manitoba for the next twenty years. She was widowed at the age of 52.

Hahn was an active member of the Alberta War Brides Association and enjoyed the many friendships of sister brides. She had a special pride in being a member of the Order of the Eastern Star with almost seventy years of service.

She will be remembered for her sparkling wit, her caring nature and her sense of adventure.

The family would like to thank the staff of West Highlands Good Samaritan Centre, and the staff at the Dialysis unit at the Lethbridge Hospital for the loving care she was given in her last years. We would also like to thank Cornerstone Funeral Home for their compassion and caring.

In lieu of flowers please make a donation in her name to the Dialysis Unit at the Lethbridge Regional Hospital Foundation – 960 – 19 Street South, Lethbridge, AB, T1J 1W5 https://www.securewebexchange.com/ crhfoundation.ca/give/donate.php

A Service of Remembrance will be held at CORNERSTONE FUNERAL HOME – 2800 Mayor Magrath Drive South, Lethbridge, AB. on Tuesday, May 2, 2017 at 1:00 P.M. with Pastor John Moerman officiating. A Private Family Interment will take place in Ponoka, AB. on May 3, 2017.