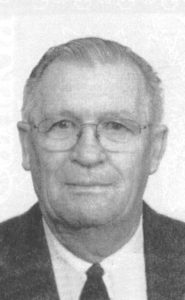 EUGENE WELTERLICH, of Lethbridge, beloved husband of the late Inge Welterlich, passed away peacefully at the St. Michael’s Health Centre on Wednesday, March 29, 2017 at the age of 87 years.

Born September 15, 1929 in Eigenfeld, Ukraine, Eugene immigrated to Canada in 1951, where he spent a year working on a farm in Moose Jaw, Saskatchewan. He moved to Lethbridge in 1952, where he met the love of his life, Inge, and the two were married in 1954.

The most important thing in his life was his family. He worked hard to provide for them and give them a wonderful life full of love, laughter and travel. Once the children were adults, one of his favourite things was going down to Las Vegas with Inge and camping in the mountains.

His other passion was construction. He worked for Art Batty Construction for four years, building many homes in Lethbridge before opening his own company, Welterlich Construction Ltd. There, he specialized in farmhouses and warehouses in the industrial park, and later branching into cabinetry. Many of his clients became lifelong friends.

Eugene and Inge loved to socialize and hosted many parties with friends and family. They were longtime members of the German Canadian Club and enjoyed going to dances. They also loved sports; especially hockey and they sponsored a broomball team.

The family wishes to extend their gratitude to the staff at St. Michael’s Health Centre for their support in his final days. We would also like to thank Cornerstone Funeral Home, especially Travis Zentner, for all his compassion, humour and guidance.

In respect to his last wishes, he was laid to rest with his wife during a private family service on May 2, 2017.