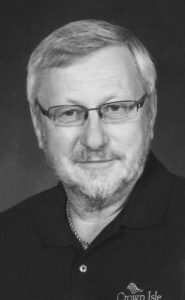 1 John 5:13 “These things I have written to you who believe in the name of the Son of God, in order that you may know that you have eternal life.”

LAWRENCE JOHN VAN EGMOND passed from this life to eternity on May 6th, 2017 at the age of 68 years.

Lawrence was born in Lethbridge, Alberta to Janette and Casey Van Egmond on January 3rd, 1949. He was the second child of a family of five. He is survived by brothers Geoff (Colleen), Jim (Sylvia) and Tim (Lynn) and their families. Lawrence was predeceased by his parents, his sister Marilyn, and sister-in-law, Kathy.

On June 28th, 1969, Lawrence married Margaret (Marg.) Knight and their life together as husband and wife began – though they often joked that they really didn’t decide to get married until Grade 7! Together they faced much joy and also some great sadness. In 1971, Lloyd James arrived, followed by Christopher John in 1973. Tragically, Lloyd passed on October 14th, 1974. Then in 1977, Jennifer Lynn arrived, bringing renewed joy, and Matthew Charles rounded out the family in 1979. As of Lawrence’s passing, the family had grown. Chris married Rachel (Willms) and blessed the family with Ressa and Nolan. Jennifer married Luis Caceres Lindo, providing the family with two precious little live wires, Jeremiah and Micah. Most recently, to everyone’s delight, Matthew married Kim (Franceschin) in May of 2016.

Lawrence worked as a Master Electrician in the Lethbridge area for many years. His first employment was with Lethbridge Electric in 1967, followed by apprenticeship and employment with Wyatt Electric for more than twenty years. His career concluded as Owner/Operator of Van’s Electric Ltd.

Lawrence was a man of many and varied interests. As a new believer, he got involved with the training of young men through Christian Service Brigade and home Bible studies. He loved camping, fishing, hunting, hiking and anything that took him into the great outdoors. He discovered a passion for flying, which led him to flight training in 1983/84. He also found the challenge of building airplanes from plans was very rewarding. He built a MiniMax as a solo pursuit and most recently worked as part of a group of six builders, constructing Zenair 750 airplanes. He fondly referred to the possibility of formation flight as the ‘Debut of the Slow Birds’. Lawrence was actively involved in the Lethbridge Sport Flyers organization, supporting such endeavors as fly outs and COPA First Flight opportunities. The last COPA for kids he volunteered at was special in that Ressa and Nolan were both in attendance and flew. His grandchildren, all four, were near and dear to his heart, the source of great joy.

Lawrence’s life will be celebrated at the CORNERSTONE COMMUNITY (EVANGELICAL FREE) CHURCH, 440 Crescent Ave., Picture Butte, AB, on Thursday, May 11th, 2017 at 6:00 P.M.

Lawrence will be laid to rest at the MONARCH NOBLEFORD CEMETERY, on Thursday, May 11, 2017 at 2:00 P.M. Both events are open to anyone wishing to attend.

The family requests that, in lieu of floral tributes, donations of time, or financial resource, be made to the charity of your choice.