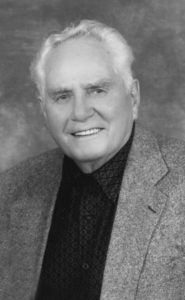 LEONARD “LEN” WILLIAM TETZLOFF, of Lethbridge, passed away at the Chinook Regional Hospital, on Sunday, May 7, 2017 after a seven-month illness at the age of 88 years.

Len was predeceased by his loving wife Jean after 46 years of marriage, brothers Paul and Phillip Tetzlaff and sisters Irene Sayers and Eva Landeen.

Len was born and raised in the Gull Lake, Saskatchewan area. Coming from good German heritage, he learned his strong work ethic on the farm. After finishing high school in Saskatchewan Len worked for his Dad and on neighbor’s farms until he struck out on his own for Calgary where he met his first wife Jean at a Dance Hall. He must have been a good dancer and charmer as Jean and Len married April 2, 1953. Charlotte, their only child, followed a year and a half later and Len became a family man, devoted husband and father. He worked for Kraft Foods for 38 years in the interior of B.C. but primarily southern Alberta and earned his reputation as one of the top sales representatives in Western Canada.

Len was a very social man, active in a host of local clubs and organizations. He had a passion for camping with his RV, dancing, golf, curling and cards with Crib being his favorite. After Jean’s passing in 1999, Len met and married Laureen and had many adventures together, travelling through Canada and into the States. As a couple, they were very active in social groups like the Revellers and could often be found playing cards with a host of good friends.

Len was very proud of his family and his extended family through Laureen, her children and grandchildren. He loved and thoroughly enjoyed his great grandchildren, taking particular pleasure in a good teasing and the follow up conversation. Len was immensely proud of his grandsons as they were growing up and in particular the honorable men that they grew to be, complete with their strong moral values and beliefs.

After Len had passed, we found a scrap of paper in his wallet with a note in his own hand writing that said:

A great man is he who has

The heart of a child.

A Memorial Service will be held at CORNERSTONE FUNERAL HOME, 2800 Mayor Magrath Drive South, Lethbridge, AB, on Monday, May 15, 2017 at 1:00 P.M. with Reverend Bob Wallace officiating.

Following the Memorial Service, Len will be laid to rest in the Mountain View Cemetery.