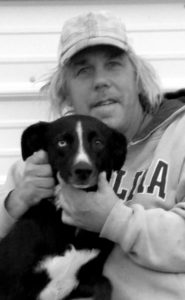 Griff was born June 21, 1960 in Sweetgrass, Montana in the house of his parents, Lawrence Eldon and Megan Samuel Bye. The family moved to the farm south of Kevin in 1966. Griff went to grade school in Kevin and upon graduating from the 8th grade, attended North Toole County High School in Sunburst where he graduated with the class of 1978.

Griff played basketball for the Refiners and was an All-Conference First team selection in his Senior year. He was also the starting shortstop of the Cut Bank Lobos American Legion team.

Griff attended the University of Montana and although he was a quarter away from a math and English endorsement, he earned his degree in Elementary Education. His first job was teaching and coaching in Rocky Boy. From there he moved on to North Toole County High School in Sunburst where he taught and coached for over 20 years. Subsequent coaching stops included Valier, Kremlin-Gilford and Power. Griff also taught for one year in Shelby. All in all, Griff coached over 900 high school games which included both men’s and women’s teams.

Griff’s passion was sports. He played countless softball games across the state, the northwest, and even Canada. He thrived on the competition as well as the camaraderie. A humble and unassuming person, Griff always won and lost with class. As a coach, and ever the teacher, he touched an incredible amount of people, both adults and students.

As years went by, Griff became more and more interested in new farming techniques and processes. A big proponent of crop rotation, cover crops, and pulse crops, he was one of the first in the North Country to try various non-traditional crops.

Condolences can be made to www.asperfh.com.