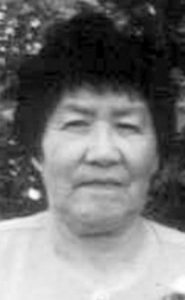 It is with great sadness, we announce the passing of our mother, grandmother and sister, SOPHIE SCOUT Ikkinaohkomi (Sings Softly) on May 10, 2017 in Cardston, AB at the age of 81 years. She will be remembered forever by her daughters Kelli Wells (Vince), Karen, Nadine, Audrey Scout (Joey); sons Terry and Morgan; grandchildren Shauna, Dwight, Kyle, Marisia, Lacey, J.L, Lorina, Brett, Tenneil, Jarrett and the late adopted grandchildren Corey Scout and Simon. She is also survived by her great grandchildren Derrick, Corbin, Sophie, Kenzie, Heyden, JJ, Kylie, Kaley, Peyton, Sara, and Brooke; her sisters Pearl LTS, Sheila Hunt and Barbara (Donald) Cotton ; also fondly remembered by her numerous nieces, nephews and cousins too many to mention.

Sophie was born in Lethbridge, Alberta to Bob and Lost Bird (Bottle) Hunt on March 5, 1936. Her early education began in Lethbridge, AB and Coaldale AB, later attending St. Paul’s Residential School until grade 11. She started working when she left school, first as a nanny in Granum, AB. In 1980, Sophie pursued her career as custodian at St. Mary’s Residential School until KBE took over. She continued working there until her retirement in 2003.

Along with her late husband, Leo Scout; they made their homestead at Fish Creek starting in late 1950. She was a devoted wife, mother and grandmother who enjoyed her gardening, cooking, family gatherings and

travelling. Sophie was not afraid to get her hands dirty when digging up the soil for her trees and shrubs. She loved gardening as she planted many beautiful flowers around their house. Family visiting would comment on her landscaping and gardening skills. Her hard work was evident with her beautiful trees, shrubs and flowers. Sophie often reminisced about her trip to Denver, Colorado with her in-laws Mildred Scout and the late Beatrice Big Sorrel Horse. Spending time with her sisters was a passion she loved, whether it was barbecuing, playing bingo or just visiting with them. She often mentioned how she enjoyed sleeping at her sister Sheila’s place in Lethbridge as she would give up her very comfortable bed for her.

Sophie is predeceased by her late husband Leo Scout: her parents Bob Hunt and Lost Bird Bottle; an infant son Blaine; her brothers Peter Hunt, Jim Hunt, Bernard Hunt; grandparents, aunts and uncles. Families include Bottle, Brave Rock, Buckskin, Scout, Hunt, No Runner, Red Crow, Stabsdown and others we may have missed. We apologize for this.

A Family Service will be held at Legacy Funeral Home, Cardston on Thursday, May 18th from 5:00 to 6:00 p.m. followed by the Wake Service at the Senator Gladstone Hall, Blood Reserve from 7:00 to 11:00 p.m. The Funeral Service will be held at St. Mary’s Catholic Church, Blood Reserve on Friday May 19th at 11 am. Interment in the Blood Band Cemetery.