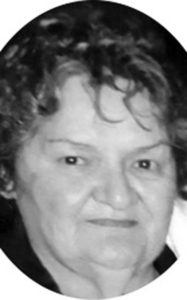 SHIRLEY HEALY (TAILFEATHERS), beloved wife of the late Dave Healy Jr. ,passed away on Friday, May 12, 2017 at the age of 76 years, surrounded by family. Shirley was born at the Blood Indian Hospital on July 13, 1940 to Ken & Helen Tailfeathers.

In her earlier years, she loved playing in a softball league and also travelling to local rodeos with her dad Ken Tailfeathers, where she took part as a barrel racer. She even competed in the Cardston Rodeo Queen contest one year. In the early 70’s she began her lifelong busing career. It was then that she became a bus owner and driver. She was also one of the first counselors at St. Paul’s treatment center.

One of Shirley’s greatest passions was supporting her sons in their hockey careers, where she was both coach and manager to them. Everyone remembers the infamous “mothers vs. sons” game where she played goalie against Lorin and Troy. One of her greatest joys was watching her grandchildren join in the sport as well. Not only was she one of the greatest (and loudest) hockey moms to her kids and grandkids but also to many, including her nieces and nephews.

Shirley’s other great passion was supporting and working side by side with her husband Dave in building their ranch and horse racing career. She was a constant presence on the track not just as a fan, but working in the barns, the paddock, and even in the gates. Shirley loved and helped care for every one of their horses. It was here she met and built her racetrack family which consisted of people from all over Canada and the states.

She will be surely missed by all who knew and loved her. Heaven was changed forever when Auntie Shirley walked through those gates, welcomed by Uncle Dave, Rusty, Tawny Jo, her mom, Dad, and siblings.