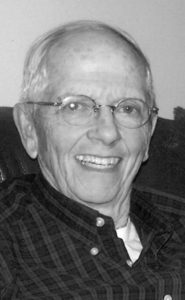 With deep sadness and comfort, the family of Stephen Glenn Tollestrup announce his passing May 22, 2017 at the age of 83, after a brave and valiant battle with Alzheimer’s disease.

Steve was born in Raymond on April 2, 1934 to Ruth & Glenn Tollestrup. In his teenage years he began working closely with his father in establishing a road paving and sand and gravel business now known as Tollestrup Construction, where he spent the rest of his working life, eventually passing the torch on to his children Martie Murphy and Jim Tollestrup. In 1988 they ventured into fast food franchises, opening the first Alberta “Wendy’s” franchise. The company then branched into other franchise brands spanning all across Alberta. Steve and his father were very proud of the company they created and grateful for the extended family of people (many of them related) who have worked to build it over the last 80 years.

Steve was a gentle, kind and fun-loving soul. When he wasn’t at work or with his family, he could be found on the golf course or with the Big Gulp Gang (Steve with best buddies Doran Johnson and Phil Leier) at the local 7-11. Steve was a lifetime member of the YMCA, and remained physically active throughout his retirement years.

During his battle with Alzheimer’s, Steve was taken care of by his family, including especially his daughter Rachel, her husband Doug Atwood and their loving family, and more recently by the kind staff at Park Meadows Village.

Steve’s funeral will be held on Thursday, May 25, 2017 THE CHURCH OF JESUS CHRIST OF LATTER DAY SAINTS, 506 Highlands Blvd. West, Lethbridge. Meet the family from 2:00 – 2:45 p.m., followed by a service at 3 p.m. Interment to follow at Archmount Cemetery.

In lieu of flowers, the family requests that donations be made to the Alzheimer’s Society of Lethbridge, 740 4th Ave. South, Lethbridge, Alberta T1J 0N9

One Condolence for “TOLLESTRUP, Stephen”