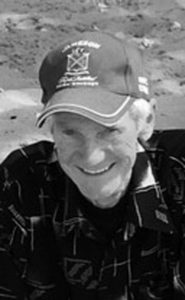 Patrick “Paddy” Cashen passed away in the arms of his cherished wife Shirley on Thursday, May 25, 2017 at St. Michael’s Palliative Care Centre in Lethbridge.

Paddy was born in the beautiful Southwest town of Dingle, County Kerry, Ireland on March 16, 1946. After immigrating to Canada, he resided in Lethbridge, the place he called home and his love for this City was what prompted him to become a proud Canadian Citizen on June 10, 1993. Paddy remained in Lethbridge where he worked in a number of diverse occupations before becoming employed with the City of Lethbridge. He enjoyed a 33-year career with the City and was so proud of his accomplishments there, the greatest being the many friends he made over the years, several of whom he was still close with. Well, how could they resist that beguiling smile, eager handshake and wicked sense of humour! These charming traits did not go unnoticed the day Shirley Gonzy met him and he and his “lovelet” were married on July 27, 1985. Over the years they were able to share their love for travel, exploring several countries including Australia, Cuba, Dominican Republic, Mexico, a couple trips to Ireland and their recent love for cruising. They also shared a love of animals and throughout their married years raised their beloved furry kids, Shamrock (1985-1999), Jack & Kerry (1999-2015) and their most recent addition Mechelle (2015). Paddy had many hobbies and his natural talent for working with wood led him to model battleship building, a pastime that he so enjoyed and one which kept him occupied for hours while he was dealing with his illness. Each ship (and there were 30 of them) were built to scale with the precision and passion that Paddy put into anything he set his hands upon. Throughout his life and no matter what cards he was dealt he never let things get him down… he met every obstacle with such a positive, hopeful attitude and his lifelong credo was “there’s always someone worse off than yourself.” His generous, kind and obliging nature touched everyone who was lucky enough to have met him or call him a friend. He is survived by his wife Shirley and their “dogter” Mechelle; brothers Peter (Celine) and Paul; sisters Betty (Tom) Hand, Ann (Brian) Scanlon and Nuala (Joe) Costello, all of Ireland; as well as his Canadian family, brothers-in-law Lou (Lynn) Gonzy and Allan Gonzy; sisters-in-law Monica Gonzy, Sheila (Merv) Newinger and numerous nieces and nephews in both Ireland and Canada. He was predeceased by his parents. Timothy and Lillian and sister Mary and his mother and father-in-law Jeanne and Louis Gonzy. Thanks is due the Doctors and nursing staff of the Jack Ady Cancer Clinic and all of Paddy’s “girls” at Palliative Care for your kindness and attention. A very special thanks to Dr. Smuts and Dr. Frick for your visits and for always being very frank, compassionate and supportive while Paddy was in your care. In respect of Paddy’s wishes, there will be no funeral and in lieu of flowers, he asked that donations be made to The Jack Ady Cancer Clinic, 1A129, 960- 19th Street South, Lethbridge, Alberta, T1J 1W5, or to St. Michael’s Palliative Care Unit, 1400-9th Ave South, Lethbridge, Alberta, T1J 4V5.

One Condolence for “CASHEN, Patrick”