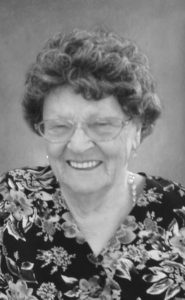 It is with sadness, but gentle relief that we announce that the Lord has called home our mother, grandmother and great-grandmother, IDA PIETERDINA VENHUIS (nee VanHuis) at the Chinook Regional Hospital at the age of 92 years.

Ida was born in Holland in 1924, where she lived her childhood and where she later met her beloved husband Harry. Ida was a woman of solid belief and a tenacious spirit which helped her through many difficult times in her life: immigrating to Canada in 1951 with two small children, where she did not know the people or the language; dealing with the care giving to the whole family when her young husband had a heart attack and subsequent heart problems; working through the pain of sometimes debilitating arthritis. She was a very pragmatic lady and if something needed to be done, she just did it! Her hands were never idle. She learned how to knit when she was five years old and produced so many beautiful works of serviceable art. Her love of the Lord, for her husband, children, grandchildren and great-grandchildren never wavered.

Ida is survived by her children Gary, Grace (Randy) Vos, Mary (Gerald) Hendriks, Ben (Trudie) and all their families, her brother and sister-in-law Ytzen and Hendrika in Holland.

We will always remember you mom, as your true grit and tenacity are so evident in many of your offspring.

A Private Interment will take place at Mountain View Cemetery prior to the Funeral Service.