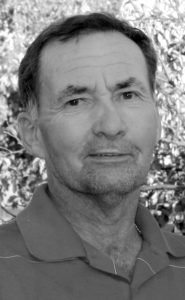 Harry Vinson Fuller of Coalhurst, beloved husband of 36 years to Mary Ann Fuller, passed away suddenly at his home on Tuesday, May 30, 2017 at the age of 62. Harry was born on February 17, 1955 in Magrath, Alberta. However, he was primarily raised and educated in Bow Island, Alberta. While managing a tire shop there, he met Mary Ann Skanderup, a local school teacher, whom he later married on April 18, 1981. It was soon after, that he pursued a career in autobody mechanics. He briefly worked at A & H Autobody in Bow Island and more extensively in Lethbridge at Bullock’s Autobody and at Dunlop Collision. Due to an accident, he retired from work in 2005. Even then, Harry was not one for sitting still or feeling sorry for himself. He worked diligently and to the best of his ability, on many self-initiated projects at home. He never gave up or thought he couldn’t do it. He just thought it would take longer. Any mistakes could be fixed so it was just a matter of persevering. He loved his family and many friends, spending as much time as possible with them. He supported his sons’ and grandsons’ school and athletic activities and was so proud of their achievements. He also taught them many skills and life lessons. Harry is survived by his beloved wife, Mary Ann Fuller of Coalhurst; his sons, Caleb (Nicole) of Coalhurst AB, David Fuller of Lethbridge AB, and Jared Fuller (Justine Tratechaud) of Calgary, AB; his grandsons, Preston Doubinin, Reagan Fuller; his brothers, Roy Fuller and Danny Fuller. Harry was predeceased by his parents, Charles and Violet Fuller; and his brother, Ralph Fuller. Harry was an honest and hard working man, cherishing his Christian faith which sustained him on many days. He was an inspiration to all who knew him and will be dearly missed. Condolences will be held at 7:00pm on Friday, June 2, 2017 at the MARTIN BROTHERS RIVERVIEW CHAPEL, 610 – 4 Street, S., Lethbridge, Alberta. A Funeral Service will be held at 2:00pm on Saturday, June 3, 2017 at the BETHANY LUTHERAN CHURCH, RR1. Tilley, Alberta, with Pastor Rob Stewart, officiating. Interment will follow in the Bethany Lutheran Church Cemetery. For those who wish, memorial donations in Harry’s name may be made to the Canadian Diabetes Association, 204, 2323 – 32 Ave. NE, Calgary, Alberta T2E 6Z3.