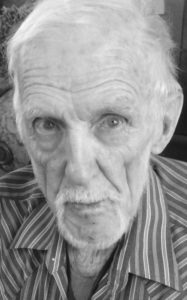 GEORGE WILLIAM RICHARDS LEE passed away peacefully in Lethbridge Regional Hospital on May 30, 2017. He is predeceased by his mother Mary Ivy Lee and his father Lewis William Lee, his brothers Lewis, Fredrick (Tedd) and David Lee. He is also predeceased by his second wife Claire and eldest daughter Terra Heggie. He is survived by his wife Anne Switzer-Lee and her children Candy, Debra, Melissa, Johnny and Tony. His sisters Lois Lee Eamon and Bette Schmidt. By his first wife of 45 years Flora Lee and their children Shannon, Charlene, Lewis, Jane, Vanessa, Tina and unofficially adopted son Adam.

George had a full life. Born in Kitchener, Ontario on November 24, 1928, he made his way West the summer of 1951. He was able to work on various farms and odd jobs one of which he would recalls fondly and often as the Buckhorn Ranch. He was known throughout the south (hutterite colonies and rural farmers) as the Calgary Power Man who climbed up the power poles no matter the weather or conditions, first with Calgary Power and then with Transalta Utilities. He was an avid hiker wandering throughout the Rocky Mountains and twice the West Coast Trail (once with his daughter Vanessa and once with his brother Lewis) with his video camera, a small backpack and an amazing sense of direction that worked most of the time. He could play a decent boogie-woogie even though his was missing 4 fingers on his left hand. He loved a good card game and was known to strike up Bridge or Shanghai with anyone who was up for the challenge. He owned motorcycles in his life-time and enjoyed taking any willing passenger on an adventure throughout Canada and the States. He loved to wander and his restless spirit took him South to California. He met his wife Anne and his beloved puppy Pogo there and they enjoyed several years in the Visalia area. His health and other circumstances redirected him north again in 2015 where he resided until his passing. He was a father, grandfather, supportive husband and provider. He was stubborn most times and a man who lived life on his terms always. He was an avid movie fan and loved to solve the most complicated crossword puzzles. He was a character, wonderful sense of humor and we will miss him. Many thanks to the staff and his friends at the View, his home care workers, especially Emanuelle and any others who made my dads life just a little bit better over the years. There is a small family get together this weekend to honor his memory with his ashes scattered in his favorite places throughout the coming year in lieu of a funeral.