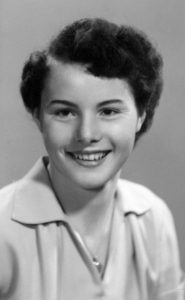 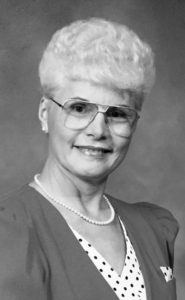 It is with great sadness that we announce the passing of Dorothy Jean Murrell (Olshaski, née Wright) on Wednesday, June 7, 2017 at the age of 79 years.

Dorothy was born in Lethbridge on August 11, 1937, and was the eighth child to Agnes & John Wright. The family moved to the Broxburn area in 1946.

Dorothy graduated from McNally School in 1955. She married her high school sweetheart, Bob Olshaski, on October 22, 1955. Together, they had five sons: Bob, Rod, Greg, Ken, and Doug.

Bob and Dorothy enjoyed 31 years together. A trip to Russia for the 1972 Summit Hockey Series between Canada and Russia with some close friends, Ben and Bernice Pavan and Bill and Myrna Tymensen which was a highlight, and we won. The two also enjoyed many wonderful trips with the Old Timer’s Hockey Team to many European destinations. A trip from Portugal to Morocco via hydrofoil was interesting, but scary. A train trip from Holland through many cities was fun and memorable as well.

Dorothy was a member of the Catholic Women’s League. In 1974, she entered the Nursing Program at the Lethbridge College, and graduated in 1976 with her R.N. – a lifelong dream come true – and began work at St. Michael’s and the Coaldale Hospital.

She married Alex Murrell on January 25, 1992, and together they built a new house and enjoyed many happy years travelling to Mesa, Arizona over the winter holidays. Dorothy liked bowling and golf, while she and Alex enjoyed camping with Greg & May and Ken & Millie and their families. They would also partake in watching the grandsons play hockey and soccer.

A Funeral Mass will be celebrated at OUR LADY OF THE ASSUMPTION CATHOLIC CHURCH – 2405 12th Avenue South, Lethbridge, AB on Saturday, June 10, 2017 at 11:00 A.M. with Father Kevin Tumback, Celebrant.

Following the Funeral Mass, Dorothy will be laid to rest in Mountain View Cemetery.

The family would like to thank Dr. Ireland, Dr. Bailey, the nurses and staff of 4B at the Chinook Regional Hospital, and the palliative doctors and nurses at St. Michael’s Palliative Care Unit.

One Condolence for “MURRELL, Dorothy”