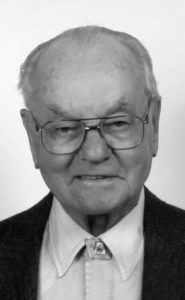 Mr. Lawrence Yearous of Fort Macleod, passed away on June 6, 2017 at the age of 84 years at Chinook Regional Hospital, after a lengthy illness. Lawrence was born on August 10, 1932, in Edmonton, Alberta and was raised by his adoptive parents, Milo and Sarah Yearous, on a ranch in Cadogan. He was home schooled from grades one to three and then attended school in Cadogan and completed high school in Sedgwick. After graduation, he worked on his family’s ranch alongside his father and brother Joe. Lawrence also worked for a short time as a truck driver before deciding to further his education. He graduated from SAIT in Calgary as an Aircraft Maintenance Engineer and for several years worked for Pacific Western Airlines and later Gateway Aviation. In 1968, he started working for Dome Petroleum, first in Consort and later in Vulcan, and remained with the company for over 20 years. Lawrence resumed his career as an Aircraft Maintenance Engineer with Field Aviation in Calgary until his retirement in 1997. In 2006, Lawrence moved to Fort Macleod to be closer to his son and his family in Lethbridge. In June 2016, he moved to Edith Cavell Care Centre in Lethbridge where he resided until his passing. Lawrence had a passion for flying, earning his private pilot’s license and owning his own small aircraft. He enjoyed hunting, fishing, golfing, and camping with friends and family as well as taking long drives in the country. He took great pleasure in playing the violin and in his retirement, he also made and sold violins. Lawrence is survived by his children, Jacqueline (Bob) Angione and James Yearous; grandchildren Paige, Mae, Christian and Alessia; former wife Gill; sister Teresa (Ted) Suess; nieces Anita Suess and Patricia (Mike) McGrath; and sister-in-law Shirley Yearous. He was predeceased by his parents Milo and Sarah Yearous; brother Joe and nephew Leonard Suess. A Private Service will be held.