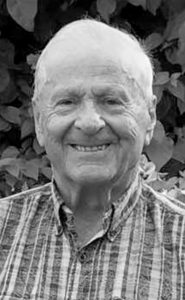 Mr. John (Jack) Morrison of Lethbridge, beloved husband of the late Mrs. Elaine Morrison, passed away at the Chinook Regional Hospital on Friday, June 9, 2017 at the age of 85 years. He was a loving father to Rob (Marie), Barry (Audrey), Marilyn (Joe), Vicki (Paul). He leaves behind Grandchildren: Jessica (Sheridan), Lindsay (Mike), Cary (Pamela), Chris (Angele), Kadie (Matthew), Taylor, Madison and Carter as well as Great Grandchildren: Katryna, Sienna, Kyler, Emmett and Rory. Jack predeceases his siblings Donald Morrison, Jeanette MacQuarrie, and Milton (Loretta) Morrison. Jack’s love of nature led him to a career as a Fish and Wildlife Officer for 28 years. His other endeavours included Telegraph Operator for the Canadian Pacific Railway and farming in the Handhills area. He was a social and active man who was deeply involved with his family. He loved fishing, collecting model trains, and building and flying model airplanes. He also enjoyed helping neighbours, friends, and anyone who needed assistance. His family and friends will always remember him as a caring loving person. He will be greatly missed. A Memorial Service will be held at 1:00pm on Thursday, June 15, 2017 at MARTIN BROTHERS RIVERVIEW CHAPEL, 610 4th Street, South, Lethbridge, AB with Reverend Trevor Potter officiating.

One Condolence for “MORRISON, John”