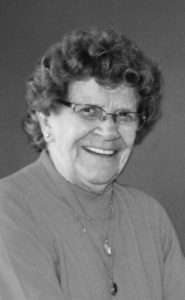 JANNA TAMMINGA, beloved wife of Willem “Bill” Tamminga, of Picture Butte, passed away at home surrounded by her loving family on Friday, June 9, 2017 at the age of 85 years.

She was predeceased by her parents, two sisters and one brother.

Janna was born to Blijke and Pieter Jan Nienhuis on January 16, 1932 on her family farm in Bedum Netherlands, the third of nine children.

She grew up in Holland and went to school in Bedum. Janna met her future husband, Willem Tamminga, when he was working for her father. They started dating in 1950 upon his return from the Indonesian War. Janna and Willem married on February 9, 1955 in Bedum then immigrated to Canada in April 1955. They traveled by boat to Canada then by train to Lethbridge where they were driven to Nieboer’s farm to start their new life.

Janna was a loving and devoted homemaker. She enjoyed the outdoors and tending her beautiful gardens. Janna was skilled with her hands and made beautiful needlework creations that are cherished by her family. She especially enjoyed caring for her grandchildren and great-grandchildren and supported them in their many endeavors. Janna also took great pride in painting all of her children’s first homes as well as many others.