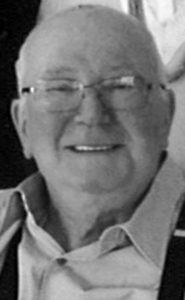 Sydney Herbert (Herb) Arthur Joseph, the eldest of seven siblings, passed away in Lethbridge, Alberta, on Sunday June 11, 2017, at the age of 86 years. “Grandpa” was a wonderful husband, father, grandfather, and great grandfather, and will be greatly missed. Herb was born in Saskatchewan and joined the Royal Canadian Air Force as a military police officer. He then worked in Flin Flon in the mines, before joining the Edmonton Police Service in 1955, retiring 30 years later as a Staff Sergeant. He was a passionate volunteer, working with the Edmonton Minor hockey programs and in his retirement with the Edmonton Crime Stoppers and Neighborhood Watch. He was one of the committee members who worked tirelessly to obtain the funding for the first Air 1 police helicopter for the Edmonton Police Service, and he was very proud of that achievement. He was also a dedicated Oilers fan. Herb is survived by his loving wife, Irma Hannah, his children Randy (Bev), Keith (Carla), Allan; his grandchildren Steven (Lindsay), Christine (Jason), Rebecca (Nick), and Courtney (Travis); and his great grandchildren Sayre, Landon and Hadley Joseph, and Jaxon Kapler. He will also be missed by Irma’s family, daughters Carol (Len) Green and Valerie (Paul) Coe, grandchildren Avery (Pat) Green, Janna (Paul) Garneau, Carla (Robert) Heintz, Kyle (Erin) Miles, and great grandchildren Zander and Inara Garneau, and Scarlett and Hannah Heighington. Herb was predeceased by his wife Edith (2005), grandson Sydney (2009), parents Sydney and Joyce, sister Daryl, brothers Frank and Don, brother in law Tony, sister in law Denise, and niece Beverley. A Memorial Service will be held at 11:00am on Friday, June 16, 2017 at Evergreen Funeral Home, 327-10 Street South, Lethbridge, AB, T1J 2M7. A Memorial Service will also be held at 11:00am on Friday, July 21, 2017 at Wellington Park Community Hall, 13440-132 Avenue, Edmonton, AB, T5A 5E2. In lieu of flowers, and in the memory of Herb, the family would appreciate donations to the Edmonton Police Foundation 9620-103 A. Avenue, Edmonton, Alberta T5H 0H7 in support of Air 1, or to your local Neighborhood Watch or Crime Stoppers. The family would also like to thank the caring staff at the Good Samaritan West Highlands Center, as well as Dr. T.D. Sommerfeldt, Dr. E. Bly, and Dr. E. Janzen for their excellent medical care.

One Condolence for “JOSEPH, Sydney”