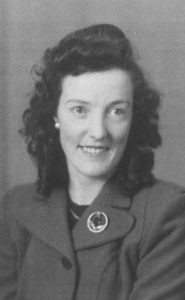 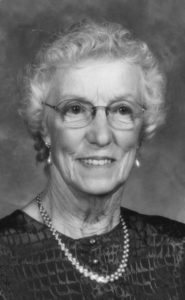 Mary Chisholm Robertson Skrukwa (nee Moore) was born March 16, 1923 in Slamannan, a community in Falkirk, Scotland. She spent the first 21 years of her life growing up in Falkirk with 5 sisters (Jane, Louisa, Helen, Roberta, Betty) and one brother (Michael) in and around Falkirk Scotland. During the war years she worked in a munitions factory but as luck would have it a dashing young soldier from Lethbridge was directed to visit the Moore family in Falkirk by a relative back in Alberta. That fortuitous meeting turned into a romance and finally marriage. Joe Skrukwa became Mary’s husband on July 5, 1945. Her wedding dress currently resides in the Galt Museum in Lethbridge.

Following the war Mary boarded a ship in Southampton (her first time out of her home shire) June 22, 1946 to sail to Halifax then boarded a train to travel across Canada to Medicine Hat where Joe met her and continued the trip to Lethbridge where her new life began.

Initially Mary and Joe lived with Joe’s mother (also Mary) who spoke only Ukrainian while Joe built a house for his family. In 1949 Mary made the trek back to Scotland, as Joe had promised Mary’s father Felix would happen, but this time with an infant daughter, Maureen. After six months Mary returned to Lethbridge, daughter in tow, to the new home Joe had completed in her absence.

Mary soon presented Joe with two more children: a daughter Elizabeth (Betty) named after Mary’s mother and a son Michael. And so, Mary and Joe set out creating a new life in her adopted country of Canada and city of Lethbridge but she never lost her love for Scotland nor her Scottish accent which became her trademark along with her ready smile and quick engagement with others.

Living only blocks from the new church they helped build (St Basils) Mary and Joe became faithful servants of God always ready to lend a helping hand to those who needed one. Mary was a Life Member of the Catholic Women’s League, active for most of her life. The War Brides became an important reference point for her as she connected with many life long friends who had traveled the same road as her. Soon Joe’s mother and his brothers and sisters (Annie, Dean, Jenny, Francis, Stan and Tommy (all deceased)) became her extended family. Mary’s best friend and fellow war bride Mary Wesko predeceased her.

In her last years her son Michael was her faithful caregiver. Her life was also touched by many caring and giving friends who made her life blessed and her passing peaceful.

A Funeral Mass will be Celebrated at ST. BASIL’S CATHOLIC CHURCH on Saturday, June 17, 2017 at 10:00 A.M. with Father Kevin Tumback, Celebrant.

One Condolence for “SKRUKWA, Mary”