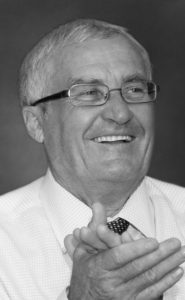 JAMES “JAMIE” ELWOOD SORGARD, of Picture Butte, AB, passed away peacefully at the Chinook Regional Hospital on Friday, June 16th, 2017 at the age of 66 years.

Jamie was born on November 14, 1950 in Lethbridge, AB and was raised on the family farm in Iron Springs. After attending school in Iron Springs and Picture Butte, he trained at Lethbridge Community College and was a butcher in Picture Butte before starting a dairy on the family farm in 1970. He married his wife Karen in 1979 and they raised their four children on the farm until selling the land and dairy in 1998 after which he and his brother Randy continued to farm near Calgary for another four years. He worked in construction for a time and then returned to his love of farming by working casually driving a truck and doing some custom work for area farmers.

He was a man of tremendous faith with a gentle spirit and wonderful sense of humor. His pride and joy were his family whom he loved deeply. He loved the outdoors, especially time spent camping and fishing when the children were young and later the winter getaways in the tropics. He was an avid gardener as evidenced by the oasis he created on the acreage in Picture Butte.

His quiet courage and strength of spirit will be carried forward by those who knew and loved him.

Thanks to Dr. Lui, Dr. Turner and the staff of Unit 31 at the Foothills Hospital and a special thank you to Dr. Shukkoor from Lethbridge Palliative Care.

“Eye has not seen, nor ear heard, nor have entered into the heart of man the things which God has prepared for those who love Him” 1 Cor. 2:9

A Service of Remembrance will be held at the EVANGELICAL FREE CHURCH, 4717-24 Avenue South (Highway #4, just East of the 43rd Street Intersection) on Wednesday, June 21st, 2017 at 1:00 P.M., with Pastor Peter Coyne officiating. A time of fellowship & refreshments will follow.